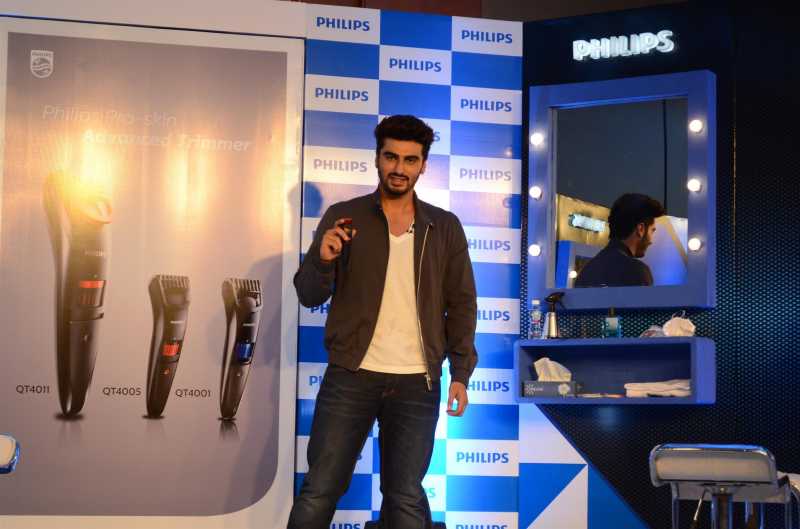 It’s an English language “offbeat” entertainer; made by an Indian director with three veteran and two young stars of Bollywood, and topped with one promotional Hindi song – that’s Homi Adajania’s “Finding Fanny”. Arjun Kapoor, who plays one of the five “oddballs” in the movie, believes Indian audiences are ready for such content.

“I was scared and apprehensive to begin with, but as the journey went on, I was more and more happy that I made the brave choice of doing an English film, which is offbeat,” Arjun told IANS during a tete-a-tete. Well, Arjun “never saw it as an offbeat film”!

“For me, it’s a film which the country is ready to watch, and the fact that the trailer has received an overwhelming response is an example that people are willing to watch such content,” he said of the over two million views that the “Finding Fanny” trailer garnered within two days of hitting online videosharing platform YouTube.

Arjun is a happy and content young man.
At 29, the son of veteran film producer Boney Kapoor has four distinct movies behind him. Starting with the 2012 movie “Ishaqzaade”, in which he sported a rough and rebellious look as Parma, he pulled off a double role in “Aurangzeb”, essayed the hot-headed Bala in “Gunday”, and the nerdy yet affable boy-in-love Krish in “2 States”.
Arjun says he was surprised when Adajania, the man behind English language film “Being Cyrus” and the Bollywood saga “Cocktail”, considered him for the role of Savio D’Gama in “Finding Fanny”, especially after watching the actor’s work in “Ishaqzaade”.
The fact that the forthcoming movie has a stellar cast comprising actors as senior and prolific as Naseeruddin Shah, Pankaj Kapoor and Dimple Kapadia as well as a glamorous star as Deepika Padukone in a de-glam avatar made the “Finding Fanny” journey all the more inviting for Arjun.
“It was almost like going to an acting class…having such fantastic actors around. The idea is to do something different, keeping in mind that you can get eyeballs with these actors who are a known commodity for Indian audience.
“Had Homi taken five unknown actors, it would have been a very niche film. But he has taken five known actors and set out to do something different. I think it’s an intelligent choice on their part to mix known commodities with an unknown world,” said the tall and handsome actor.
Of course, Arjun stepped into the film clearly knowing that away from the commercial Bollywood potboilers that he’s been part of so far, this one’s going to have a limited audience given the fact that it’s in English and sans any of Hindi cinema’s song and dance routines.
“That’s the amazing part about making cinema! People can have an opinion about it. I’d rather be part of a film about which people have an opinion than be in a project people don’t notice.
“‘Finding Fanny’ is definitely relevant in terms of getting people to talk about it. If it does well, people will talk about encouraging young talent to make films like this. If it doesn’t, then they will think how well did it do or didn’t do.
“I think it is a talking point kind of film. It won’t just come and go, which is what I like – it’s got people talking already. And you can’t always expect people to love everything you do…if they notice, for better or for worse, it’s a good thing,” said the actor.
Presented by Fox Star Studios, “Finding Fanny” is produced by Maddock Films. The film, a quirky satirical comedy, releases Sep 12.