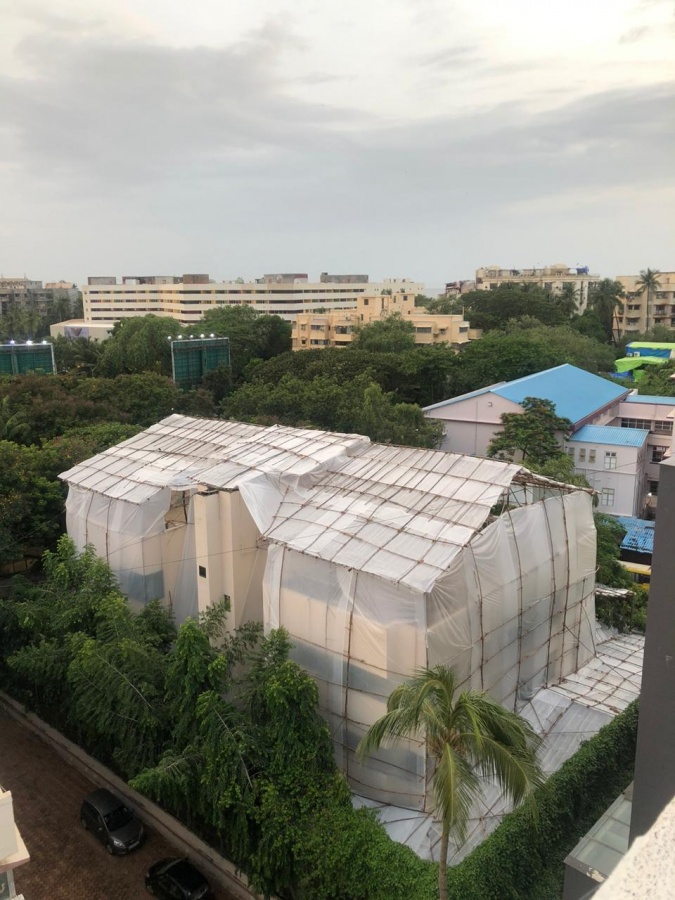 There was concern among fans after one of Amitabh Bachchan’s famous homes in Mumbai was seen covered in plastic sheets shortly after the movie icon, along with some of his equally famous family members, tested positive for Covid-19.

The famous actor, along with his son Abhishek Bachchan, daughter-in-law Aishwarya Rai Bachchan and grand-daughter Aradhya Bachchan tested positive for Covid-19 two days ago, and many wondered if the move to cover the Juhu home, named Jalsa, was to safeguard themselves against the virus.

However, an official spokesperson from K West Ward of Municipal Corporation of Greater Mumbai cleared any misinformation. In response to the query, he said that the covering was to protect the house during the monsoon.

“It is just a monsoon shed,” the official said without divulging further details.

Mr Bachchan had earlier mentioned in his blog about the adverse effects of bad weather on his bungalow Jalsa.

“Protections during the rainy season are becoming a must for houses that are built years ago and now suffer leakages .. Jalsa was built around mid 80’s or perhaps a little later .. so time and weathering has its effects..” he wrote in his blog.
Bachchan on Sunday tweeted to express gratitude to fans, well-wishers and colleagues for showering concern and prayers, after he and his family members tested positive for the virus.

In a series of two tweets, Big B wrote: “To them that have expressed their concern, their prayers and their wishes for Abhishek Aishwarya Aaradhya and me .. my unending gratitude and love …It shall not be possible for me to acknowledge and respond to all the prayers and wishes expressed by them that have shown concern towards Abhishek, Aishwarya, Aaradhya and me …I put my hands together and say. Thank you for your eternal love and affection.” His post was accompanied by a folded hand emoji.

T 3592 – It shall not be possible for me to acknowledge and respond to all the prayers and wishes expressed by them that have shown concern towards Abhishek, Aishwarya, Aaradhya and me ..
I put my hands together and say ..🙏
Thank you for your eternal love and affection ..

Big B and his son Abhishek Bachchan tested Covid positive on Saturday night and were admitted to Nanavati hospital. All members of the Bachchan family along with their household staff were tested. While Aishwarya Rai Bachchan and Aaradhya Bachchan tested positive, Jaya Bachchan has tested negative.

Soon after the news became public, wishes of speedy recovery started pouring in.