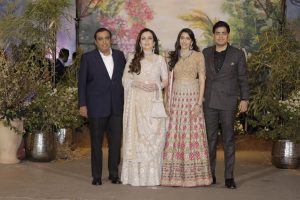 Aishwarya Rai Bachchan looked every bit of the diva at the event at Antilia here on Saturday in a saree with gold floral motifs, while husband Abhishek opted for a black sherwani and their daughter Aaradhya was decked up in a red and golden lehenga.

Ranbir Kapoor looked dapper in a black bandhgala. He made a stylish entry with his mother Neetu Singh Kapoor and filmmaker friend Ayan Mukherji.

Kajol made a striking entry with her filmmaker friend Karan Johar.

Even mother of the groom Nita Ambani posed for the shutterbugs along with her son Akash with fiance Shloka, along with her other two children, Isha and Anant Ambani.

Bollywood’s young brigade Sidharth Malhotra, Parineeti Chopra and Aditya Roy Kapoor looked outstanding in their traditional outfits and posed together for the cameras.

The luxurious 27-floor Antilia, where Akash and Shloka observed the engagement rituals, has been decorated in and out in preparation for the ceremony.

To satisfy the taste buds of the VIP and A-list guests, catering is being looked after by Foodlink Banquets and Catering. The highlight of the evening was Laduree, the French luxury bakery and sweets maker house known for their macarons.

Akash and Shloka, daughter of diamantaire Russell Mehta, had exchanged rings at an informal ceremony in Goa in March. While the wedding is expected to happen sometime this year, the Ambani family is yet to confirm the date.

Isha Ambani, who recently returned to the city after her Stanford graduation, is also set to tie the knot with beau Anand Piramal, son of business tycoon Ajay Piramal.