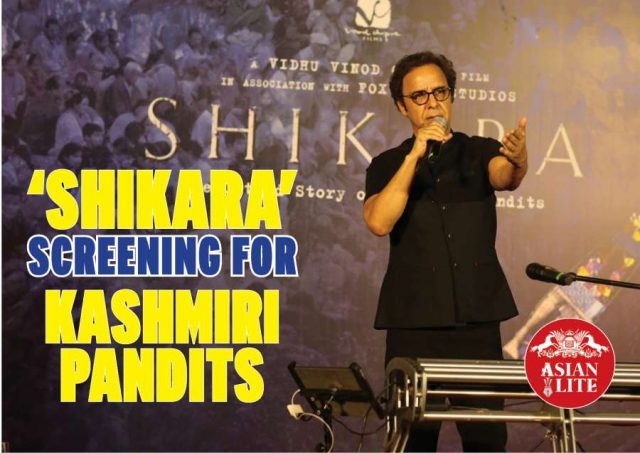 “Shikara” addresses the issue of ethnic cleansing and riots that took place in 1989 in Kashmir. The film chronicles the exodus of Kashmiri Pandits from Kashmir on the night of January 19, 1990 through the story of Shiv Kumar Dhar… reports Asian Lite News

The special screening of about 30 minutes was attended by over 200 Kashmiri Pandits,including many refugees from Jagti migrant camp in Jammu, out of which some have even worked on the film. In fact, it was also the first time that Vidhu Vinod watched the film on the big screen.

“I am a filmmaker. I am not too good when it comes to speaking… That’s why I decided to show you. You all came from Jammu especially for this I am thankful to everyone. This film is about you and for you. Making this film is a way to thank you all,” the filmmaker said as he welcomed his guests for the screening.

The “3 Idiots” producer has directed, edited and produced “Shikara” in association with Fox Star Studios.

“Shikara” is touted as a “story of resilience in the face of insurmountable odds. It’s also the story of a love that remains unextinguished through 30 years of exile. A timeless love story in the worst of times”.

“Shikara” addresses the issue of ethnic cleansing and riots that took place in 1989 in Kashmir. The film chronicles the exodus of Kashmiri Pandits from Kashmir on the night of January 19, 1990 through the story of Shiv Kumar Dhar (essayed by Aadil Khan) and Shanti Dhar (essayed by Sadia). It also shows the layers of blooming romance in the conflict-ridden state of Kashmir.

The film is very close to Vidhu Vinod Chopra, who has donned the director’s hat after his directorial “Eklavya: The Royal Guard” that had hit the screens in 2007.

At the event on Sunday, the director showed his gratitude to the Kashmiri Pandits through a short clip, navigating the journey of making the film.

“We want to say thank you to all for everything, for patience, for strength, courage for reliving it all and trusting us to tell your story. Thousands of you made the film. Thank you,” read a message in the clip.

The filmmaker, who got emotional while talking about the film on several instances, admitted that making the movie was “very difficult”.

“It took me 11 years to make the film. I wouldn’t have made it without you all. Sometimes, I used to get tired but you gave me the motivation to carry on. I am getting emotional because this is not just a film, but our life’s story,” he shared.

The filmmaker showed how he got strength from the people while shooting with another video. In the video, Kashmiri Pandits are seen singing and dancing together, and making the most of the moment.

The film will release on February 7.