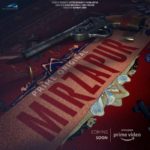 Ali also took to Twitter to post its first look that features guns, bullets, knives and much more. “Okay here it comes. Welcome to the poetry of Mirzapur. A land with lungs. #MirzapurAnnouncement.”

Ali had earlier said in a statement to IANS: “I am geared up and excited to start shooting with this talented team of ‘Mirzapur’.”

Shweta had also expressed her excitement on working with Ali on the project.

“I adore Ali. I’ve known him for a few years now. We met at Prithvi (Theatre) and even did a play together. I was absolutely thrilled when I got to know that he is going to be a part of ‘Mirzapur’. I couldn’t be happier with the casting of our series,” said Shweta.

The gangster drama has a rural setting with north India as its background.