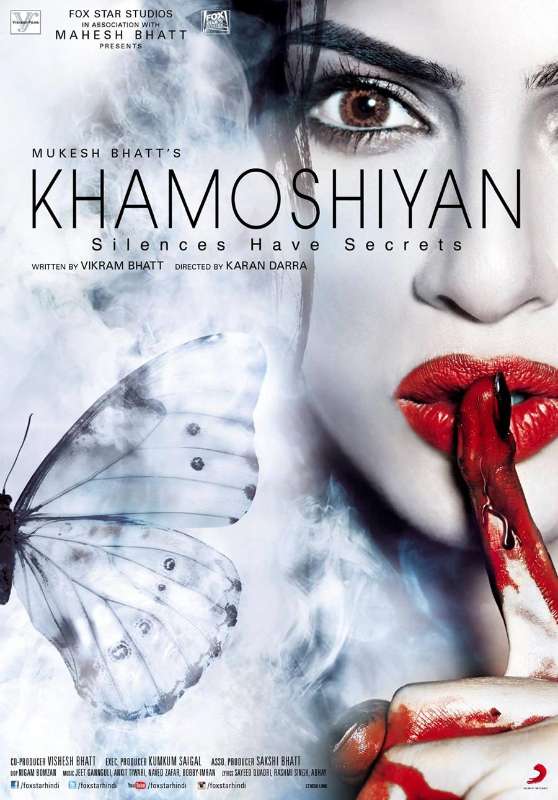 The biggest puzzle in the public domain, besides the question, “Why US President Obama chose to mouth Shah Rukh Khan’s lines from “Dilwale Dulhania Le Jayenge’?” is, “Why does a sensible intelligent man like Vikram Bhatt chose to write such stupid shiver givers?”

“Khamoshiyan” makes you shiver. But not in fear. It just makes you shake in embarrassment for all the ghosts and spirits who are so royally snubbed and insulted by such travesties of terror. Maybe the spiritual world could sue for defamation. And then there should be an added penalty for wasting three talented young hopeful actors looking for a break.

All “Khamoshiyan” gives them is a pathetic plot where creaky doors and spooky apparitions get more playing time than the actors who have to look scared and shattered when they are probably laughing behind the camera wondering who in this day and age believes in such moronic mumbo-jumbo.

Not the progressive Mahesh Bhatt for sure. Why Mr.Bhatt who has made some of the most pathbreaking films in recent times would choose to back something so shrouded in the raga of the regressive is beyond comprehension.

But all is not lost. There is a brand new version in this fearful film of the Khemchand Prakash-composed classic “Aayega aanewala”, which launched the career of Lata Mangeshkar as the voice of the nation.

I’m not too sure what the Bhatts (brothers Mahesh and Mukesh and their protege Vikram) mean to achieve by mocking the melody from the film “Mahal” in this way. Whatever their motive, the new version of “Aayega aanewala” only serves to remind us how far the ghost drama has strayed from its original purpose of creating a world where the tenable and attainable cross one another’s world in pursuit of love and fulfilment.

In “Khamoshiyan”, the protagonists snub the spirit and focus on the body. Debutant Sapna Pabbi, playing a hotel receptionist with a serious face twitch and body itch, leads both the men not so gently in bedded perdition. We see Sapna and Ali Fazal kissing, writhing, moaning and…umm…erupting. We see Sapna and Gurmeet Choudhary kissing, writhing….you get the picture? Same-to-same.

By the time we come to the….ahem….climax, we are past caring about these three abandoned souls. To their credit, the three actors manage to look appealing in spite of their unsavoury circumstances.

Pabbi is not just miscast, she is mess-cast.

As for debutant Gurmeet Choudhary, he definitely has a screen presence. One wishes he had chosen for his film debut a script that respected the audiences’ intelligence and tolerance level.