The concept for this film, Padman, is credited to Twinkle Khanna for the story that is based on the short tale in her book, “The Legend of Lakshmi Prasad”. This story has been inspired by the life of Arunchalam Muruganantham a social activist from Tamil Nadu who revolutionized the concept of personal hygiene during the menstrual cycle in rural India by creating low-cost sanitary pads.

Incidentally, the film also shares the same premise as that of Phullu which was released in June 2017.

Set in rural Madhya Pradesh, Lakshmikant Chouhan (Akshay Kumar) a mechanic by profession and a loving and devoted husband to Gayatri (Radhika Apte) ensures that his wife leads a comfortable life by introducing small inventions to enhance her daily life.

But when he learns about the stigma and taboos that surround menstruation and the unhygienic methods used by women during this period, he is pained. So he embarks on a mission to make affordable sanitary pads. How he succeeds in his endeavour, forms the crux of the tale.

Lakshmikant’s story is truly inspirational and writer-Director R. Balki leaves no stone unturned to magnify it for the large screen. Narrated in a linear manner and laced with light-humour, stellar performances and statistics-filled dialogues, this film conveys the strong message with ease and is entertaining from word go.

But the graph of the story is flat and the plot, laden with deus-ex-machinas and certain elements truly stretched a la Bollywood style especially Lakshmikant’s invention and his speech at the UN, truly makes the film, “filmi”. It loses the charm of a realistic, biographical film.

Akshay Kumar’s portrayal of Lakshmikant Chouhan is sincere. He delivers on every front and is the soul of the film. You are with him during his struggle and obsession. He is aptly supported by Radhika Apte as his wife Gayatri. She is every inch the submissive, rural lady struggling to survive within societal norms. Their on-screen chemistry is palpable. 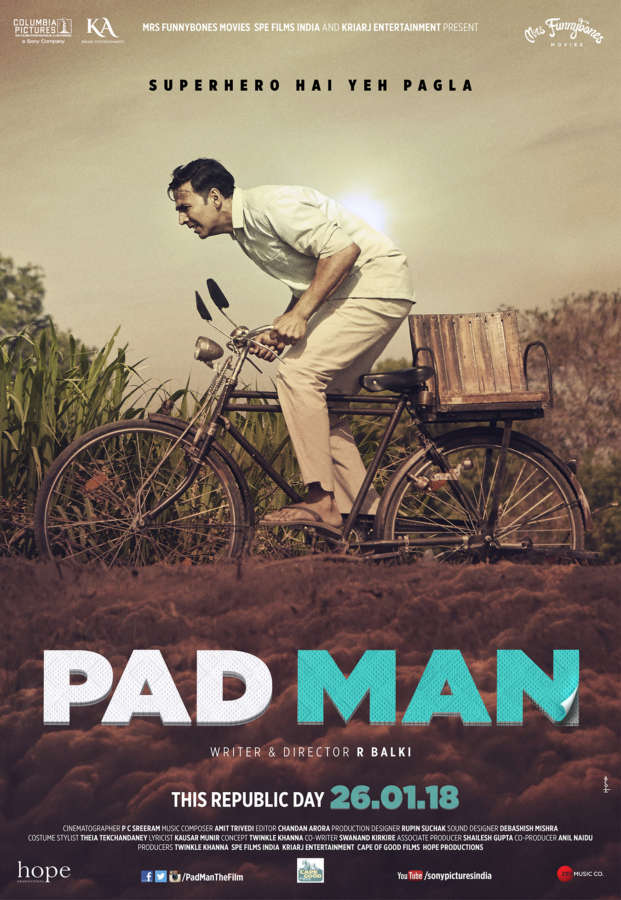 Sonam Kapoor as Pari the city-bred, tabla maestro and a freshly minted MBA, is a misfit and strictly mediocre. She walks through her role and what makes her further unacceptable is the frivolous demeanour that she is forced to portray.

On the technical front, the film has all the trappings of an A-lister.

He captures the locales in all its glory.

Amit Trivedi’s music is effective and it does elevate the viewing experience. The songs; “Aaj Se Teri” has interesting lyrics and “Ladki Sayani ho gayi” that celebrates womanhood is well-choreographed. The other two songs don’t register at all.

Overall, though entertaining, Padman is like a long-drawn public-service film that’s worth ticket money.