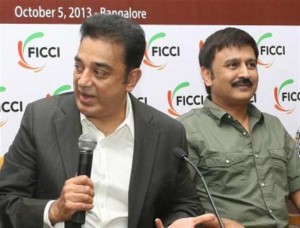 Actor-filmmaker Kamal Haasan, who is also chairman of FICCI Media and Entertainment Committee-South, will lead the Indian delegation to the 67th Cannes International Film Festival.Apex business chamber in India – the Federation of Indian Chambers of Commerce and Industry (FICCI), for the first time this year, is co-ordinating on behalf of the ministry of information and broadcasting for the India Pavilion at the gala.Kamal will lead the official Indian delegation to Cannes and inaugurate the pavilion along with luminaries such as Arun K. Singh, Indian Ambassador to France; Bimal Julka, Secretary, Ministry of Information and Broadcasting; Jerome Paillard, executive director, Marche du Film (the Cannes Film Market); and actor-producer Uday Chopra. The India Pavilion will showcase Indian cinema across linguistic, cultural and regional diversity, with the aim of forging an increasing number of international partnerships in the realms of distribution, production, filming in India, script development and technology, and promoting film sales and syndication.“Indian films – including south Indian ones – have been selected and honoured at the Cannes Film Festival for many years now. I’m happy to be part of the official Indian delegation, which will allow me the chance to speak to the world film community about the Indian film industry today. “As chairman of the FICCI Media and Entertainment Committee – South, I am delighted to have this opportunity to also speak about the development of the southern industry, which has been a special focus of mine for the last five years,” Kamal said in a statement.The Cannes film gala will conclude May 25.