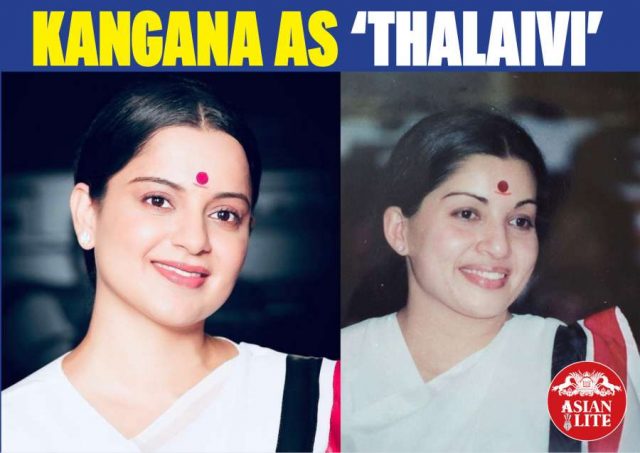 Today is the birth anniversary of J. Jayalalithaa, and a new look of Kangana Ranaut as the late former Tamil Nadu chief minister in the latter’s upcoming biopic “Thalaivi” was unveiled on social media by the actress’s sister Rangoli Chandel…. reports Asian Lite News

Kangana looks almost perfect as Jayalalithaa in the picture. She wears a white saree with a red-white-black border, in sync with the flag of Jayalalithaa’s party, AIADMK. Her hair is tied, and she wears a small red bindi on the forehead with dazzling studs.

When the makers of “Thalaivi” released Kangana’s first in the film a few months ago, it brought its share of criticism, with many saying that the actress looked nothing like the Iron Lady of Tamil Nadu. However, it looks like the makers have taken notes from the flak, because Kangana’s new look seems flawless.

Said AL Vijay, director of the film: “We’ve brought in specialists from the USA to work on Kangana’s look. In terms of the story, we would like to portray her (Jayalalithaa’s) human side without trying to glorify her.”

At a media interaction a while back, Kangana had said that while she isn’t entirely like Jayalalitha in real life, she does find certain similarities. “It is a big challenge to fit into Jayalalithaa’s shoes because she was a glamorous actress like Aishwarya Rai, which I am not. But I do find a common point. She was a reluctant actor. It is the same with me. I never wanted to be an actor. I think she always felt that she was worth much more than just being a glam doll (in films), and she became a politician. Like how I became a filmmaker because I felt that being an actress was very limiting for me. So, I think there are parallels,” she said.

The film will release worldwide on June 26 in Tamil, Telugu and Hindi.