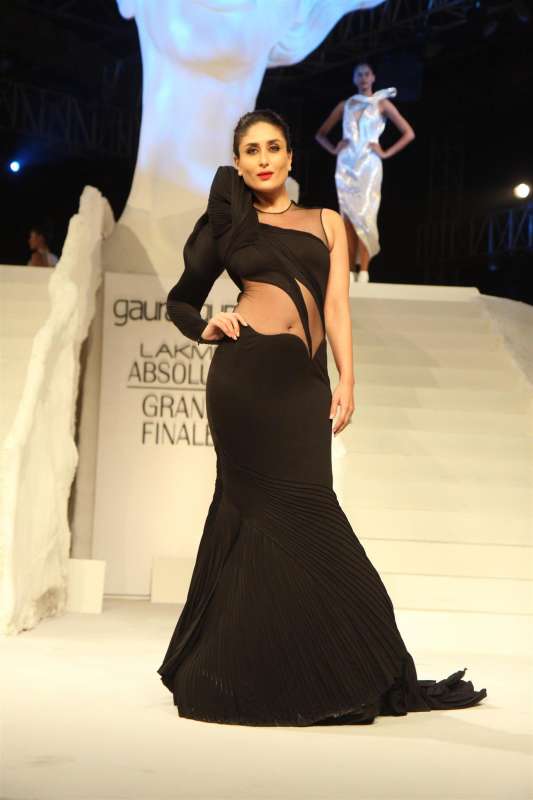 Kareena Kapoor Khan is one Bollywood actress who never ceases to receive compliments on her beauty, and she makes no bones about saying that her husband, Saif Ali Khan, surely is a “lucky man” to have her in his life.

In an interview to a leading publication, Sidharth Malhotra said that he is a huge fan of Kareena and how he wishes to have a younger Kareena to date him. Similarly, Arjun Kapoor, who’s wooing the actress in R. Balki’s next film “Ki And Ka”, has expressed his appreciation for her craft.

Asked how Saif takes all the compliments that she receives, Kareena said: “I think it’s the biggest compliment for Saif. He is a lucky man for sure.”

The actress, known for her high-on-glamour appearances in films and at red carpet events, made an appearance at the Lakme Fashion Week winter-festive grand finale 2015.

She walked the ramp for designer Gaurav Gupta in a black feminine and sensuous gown, looking no less than a diva.

While Kareena enjoys walking the ramp, she knows it requires something “different” than what her profession as an actor needs.

Asked how difficult it is to put an extra layer of makeup when she is walking the ramp, the “Bajrangi Bhaijaan” actress said: “Ramp is totally different. You are moulding yourself, as the outfit is totally different. It is a lot more glamorous. It’s all about makeup, beauty, fashion… fashion forward.

“There are a lot of things (that) come into play when you take to the ramp.”

On the big screen, Kareena says she has always tried to be as real as possible, and one would get to see that side of her in her upcoming films “Udta Punjab” and “Ki And Ka”.

“I try to keep it real as much as possible. My next film is going to be very real. ‘Udta Punjab’ will be about ‘Udta’ as a girl in Punjab. And ‘Ki And Ka’ is about a Mumbai and Delhi girl… Me being married (in the role) and how would we react… so that’s what it’s all about (sic),” she said, and cleared the air about rumours that she is not playing the role of a journalist in “Ki and Ka”.