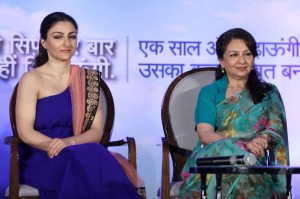 Actors like Saif Ali Khan and Mohnish Bahl didn’t find cricket or the Indian Navy as enticing as the acting world. They chose to step into the shoes of different characters and face the arclights like their star mothers Sharmila Tagore and Nutan instead of pursuing their father’s professions.On the occasion of Mother’s Day on May 11, IANS lists some of the star kids who followed their mom’s footsteps:Saif Ali Khan: The son of late cricketer Mansoor Ali Khan Pataudi and “Kashmir Ki Kali” star Sharmila Tagore made his acting debut in 1992 with “Parampara”. He didn’t taste instant success like his mother, who delivered many hits like “Aradhana” and “Amar Prem” after her superhit debut “Kashmir Ki Kali”. For long, he was best known for his supporting roles in films like “Kya Kehna”, “Dil Chahta Hai”, “Rehnaa Hai Terre Dil Mein” and “Kal Ho Naa Ho”.It was only in 2004 that many saw him as an actor who can carry a film on his own shoulders instead of relying on another star to make a film a blockbuster. “Hum Tum” not only made many filmmakers offer him lead roles but also won him the National Award for his role in the romantic comedy. Today, Saif, who has also acted with his mom in films like “Eklavya: The Royal Guard” and “Aashiq Awara”, is a sought-after actor and a producer.Mohnish Bahl: The late actress Nutan’s son is a known name in both the TV and movie industries. Though he hasn’t been able to match his mother’s success, he has given notable performances in movies like “Maine Pyar Kiya”, “Hum Aapke Hain Koun..!” and “Hum Saath-Saath Hain”.If his mom was known for being a lead actress, who gave impressive performances in movies like “Karma”, “Bandini” and “Milan”, the son of late Indian Navy officer, Lt. Cdr. Rajnish Bahl, also won hearts of the audiences with his TV shows like “Sanjivani” and “Kuch To Log Kahenge”. He continues to do small roles in films. He was recently seen in Salman Khan-starrer “Jai Ho”. 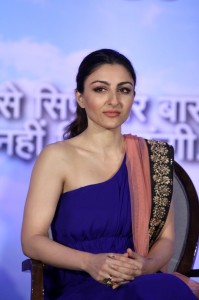 Tanuj Virwani: The self-proclaimed mamma’s boy has been open about the importance of his mother-actress Rati Agnihotri in his life. The son of architect-businessman Anil Virwani is only two films old, but he feels the sense of responsibility as his mother, who has been a part of the industry for almost 40 years, had a successful career. Both his films “Love U Soniyo” and “Purani Jeans” didn’t strike gold at the box office, but his hands are still full. The lad of the “Ek Duuje Ke Liye” star has been signed by Eros Entertainment for a three-film contract.Ruslaan Mumtaz: His mom Anjana Mumtaz, who had a successful movie career in Gujarati and Marathi films apart from Bollywood and TV, is now one of the favourite on-screen mothers. She has played a mother to Shilpa Shetty in “Dhadkan”, and Govinda’s mom in “Saajan Chale Sasural”, among others and her son is now loved by many, thanks to his current TV show “Kehta Hai Dil Jee Le Zara”.The movie career of Ruslaan, son of Sajid Mumtaz – an Air India official – didn’t have a flying start but the small screen industry seems to have embraced him. Ruslaan, who made his cinematic acting debut with “MP3 – Mera Pehla Pehla Pyaar” in 2007, was also seen essaying a police officer in the crime show “Encounter”, hosted by actor Manoj Bajpayee. He is also occupied with shooting for romantic comedy “Romeo Idiot Jathani Juliet”.Farhan Akhtar: He is a multi-talented individual just like his mother Honey Irani, now a popular screenwriter, who started off her career as a child actress. Her acts in movies like “Qaidi No. 911”, “Chirag Kahan Roshni Kahan” and “Zameen Ke Tare” in late 1950s and early 1960s are still cherished by many. She also had small roles in films like “Seeta Aur Geeta”, “Amar Prem” and “Kati Patang” when she grew older.The son of writer-lyricist Javed Akhtar, on the other hand, took the acting plunge much later. He first tried his hand at directing with hit movies like “Dil Chahta Hai” and “Don”. In 2008, he graduated from behind the camera to facing it with “Rock On!!!”. Farhan also bagged many awards for his performance in the film, for which he even sang a few rock numbers. Most recently, he was widely praised for essaying the role of former athlete Milkha Singh in the “Bhaag Milkha Bhaag” biopic.