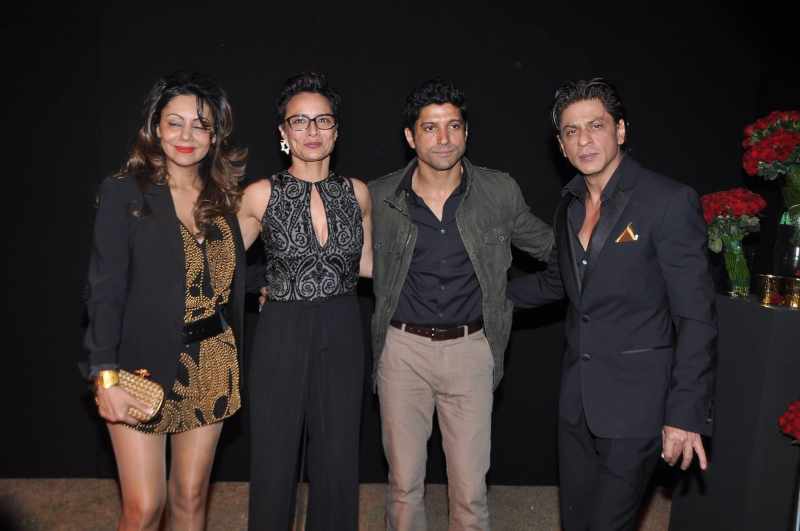 Aishwarya Rai may be the star attraction at the red carpet, but it was three top notch Bollywood Khans — Shah Rukh, Aamir and Salman – who dominated the film market at the ongoing 67th Cannes International Film Festival with buyers queueing up for their forthcoming films. SRK’s “Happy New Year”, directed by Farah Khan and co-produced by Gauri Khan and Karim Morani, presented by Yash Raj Films; director Rajkumar Hirani’s “P.K.”, which stars Aamir Khan in the lead, to be presented by Disney India-UTV; Sajid Nadiadwala’s Salman-starrer directorial debut “Kick”, presented by Disney India-UTV and a few biopics were favourites with buyers and sales agents at the Cannes Film Market.

These Khan films are being readied for release in the last quarter of the year. Having said that, it is India’s lone entry “Titli”, directed by Kanu Behl and produced by Dibabkar Banerjee, in the official Un Certain Regard Section, which is the talking point and also a top contender for the Palme d’Or this year.
Anurag Kashyap, a favourite from India, did not make it to the festival, but his new film “Bombay Velvet”, which has Ranbir Kapoor, Anushka Sharma and Karan Johar in the lead roles, received a positive response for Fox Star Studios India. Besides the biggies, small production companies from India too managed to get a tight grip on the Cannes Film Market with the launch of a dozen new completed films and a few fresh production announcements.
“It is a different India now than what I saw six to seven years back,” said Hollywood-based Indian producer Ashok Amritraj, chairman, Hyde Park Entertainment.
“The new Indian filmmakers have changed the face of Indian cinema and its global footprint,” he added.
The endeavours of Indian filmmakers also grabbed the attention of Bobby Bedi, managing director, Kaleidoscope Entertainment, a regular at the festival for over a decade, and he couldn’t stop himself from saying a few good words for the new brigade of filmmakers.
“This year the Indian producers and directors were very focused and matured than ever before,” said Bedi, who announced his directorial début “Lajo”, a big screen adaptation of Ismat Chugtai’s short story, which was extremely controversial for its time.
“Lajo” will be produced by T.P. Aggarwal of Star Entertainment Worldwide. Earlier, Mani Ratnam was supposed to helm “Lajo” with Aamir Khan in the lead role but it did not take off.
Interestingly, biopics from India were also one of the attractions at the Cannes gala, the world’s biggest gathering of film professionals from over 100 countries, in South of France.
“Nanak Shah Fakir”, a film produced by Harinder Sikka on the life and teachings of Guru Nanak, drew attention for its special effects and songs.
“We have completed the film and we are confident that it will have a global impact because of the subject,” said Sikka, who is corporate affairs director at Piramal Group, adding that former Secretary of State Hillary Clinton will launch the film in the US in July.
Initially, Oscar winner Resul Pookutty got involved with the project as a sound designer, but later he associated himself with “Nanak Shah Fakir” as a co-producer. For four days he pitched the film at the fest and made it a talking point.
Mumbai-based Kriya Films launched their finished feature film “The Answer”, which tells the story of James Donald Walters, who became Swami Kriyananda, a disciple of Paramhamsa Yogananda who penned “Autobiography of a Yogi”.
“It is an epic motion picture that presents for the first time on the cinematic screen one of the most widely known and revered spiritual masters of our times – Paramhamsa Yogananda – in his own words through his direct disciple Swami Kriyananda,” said producer Kaveeta Oberoi Kaul.
“The Answer” and “Nanak Shah Fakir” aggressively positioned a new era of filmmaking from India at Cannes.
European producer Pierre Assouline, who had produced and scripted Shaji Karun’s “Vanaprastham”, pitched his new biopic on Sant Tukaram.
From the commercial section, Viacom18 Motion Pictures aggressively pitched for Omung Kumar directed biopic “Mary Kom” and Shonali Bose’s “Margarita, With a Straw”. While Priyanka Chopra plays the Olympic medallist in the former, the latter will see Kalki Koechlin as a girl suffering from cerebral palsy.
Yash Raj Films too presented its entire slate of films for international sales and distribution.
Overall, a good year for Indian films, at least at the Cannes Film Market.