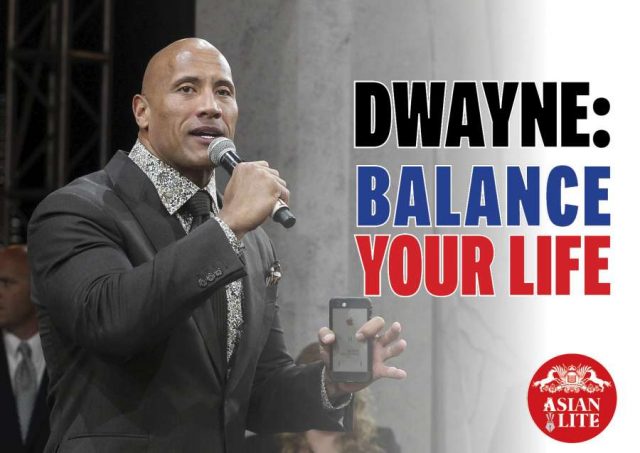 Hollywood star Dwayne Johnson says life is always so crazy and busy, and asserts that he ensures maintaining a balance between personal and professional life.

Asked how his outlook of life has changed, Johnson told IANS: “Over time, life has changed. For me, I’ve become, I think, more balanced to trying to find my balance, especially because life is always so crazy and busy for me…For you, for everybody, for everybody in India… Like everyone has crazy lives that are very busy. So we’re always trying to look for that balance.”

“So, I think as I got a little older, finding that balance, especially with my family, you know, has led to… Also, you know, I’ve been really lucky and fortunate to have some success which gives me a real sense of gratitude and some humility,” he added.

The wrestler-turned-actor, who is still popular for his wrestling persona of ‘The Rock’, is a box-office superstar, an author and a fast growing entrepreneur. As an actor, he is attached to projects such as “The Mummy Returns”, “Journey 2: The Mysterious Island”, “Hercules”, “Snitch”, “Moana” and “Fast & Furious Presents: Hobbs & Shaw”.

He was recently seen in second part of revamped “Jumanji” franchise, which is titled “Jumanji: The Next Level”, to which he is attached as a producer as well. The movie, also starring Kevin Hart, Karen Gillan, Jack Black and Nick Jonas, was released in India by Sony Pictures Entertainment India.

Talking about working with his friend Hart, he said: “You know, we’re very fortunate to continue to be able to grow in our business, but also really fortunate to make sure that we’re always holding on to each other and making sure that the audience knows that we are having fun.”

At the professional front, Johnson has started training for “Black Adam”., in which he will be seen as the titular supervillain.

Black Adam is the arch-nemesis of the DC superhero Shazam. He is imagined as a complex antihero with a rich history of his own. Although Black Adam has traditionally been a villain, Johnson is selling him as a hero. The film based on the DC comicbook villain’s exploits will open on December 22, 2021.

He will also be seen in a single-camera comedy series inspired by his life called “Young Rock”.