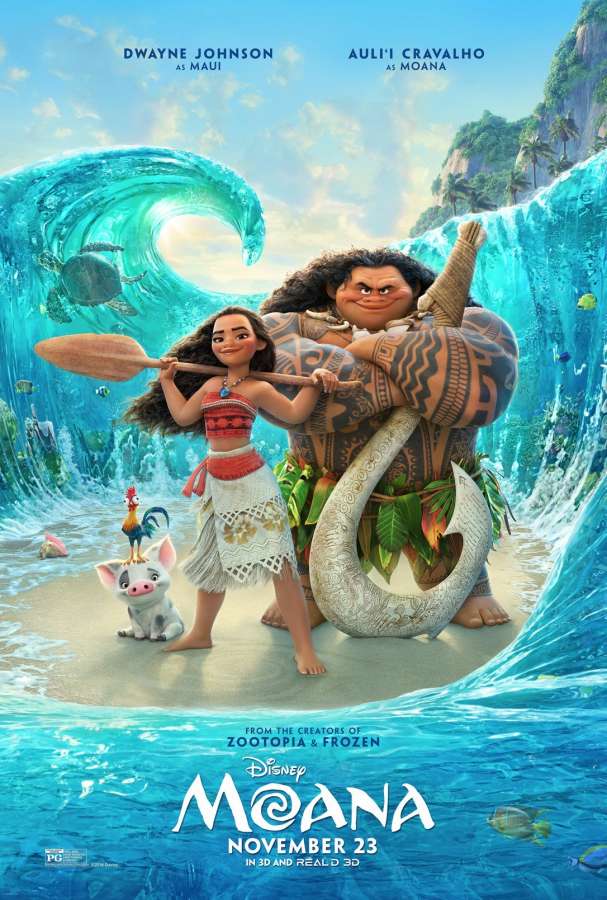 “Moana” radiates a kind of infectious warmth that only an animation film can and that too one with the optimum faith in the power of love to heal and restore our broken humanism.

“Moana” is masterly in mustering sunshine and optimism. But it scores less resoundingly in making us believe that the ocean is actually filled with friendly creatures. We saw what the ocean can do to a young girl in “The Shallows”.

In a giddying swirl of oceanic ecstasy, “Moana” goes the other way. It is the story of a bright spunky pretty and pert young Polynesian girl Moana who must set off on a voyage to find a demi-god who can save her island and people.

The film’s deeply swanky production design, capturing the azure grace of the ocean and the quaint captivating bustle of a Polynesian island, thrives on stereotypical homages to the spirit of untarnished innocence. The film populates its precocity with characters who are so noble and kind-hearted that they make nature look unnaturally bleached and natural.

The Polynesian populace is constantly singing, dancing and breaking coconuts. Beyond a point, you could break some too on these vacuously blissful character’s heads. The sassy Moana’s kin seem to believe in the power of innocence to the extent that the film obliterates all signs of mean-spiritedness from the oceanic universe.

As Moana journeys into the sea, she has for company the “demi-god” Maui. The obese giant’s character, though powered by Dwayne Johnson’s swaggering self-deprecating machismo, is defeated by its lack of dignity.

No, you really can’t have a ‘demi-god’ who behaves like a dummy God, cracking awful jokes, talking to his multi-tattoos (yes, Maui has an ongoing conversation with his body imprints — try that for self-obsession) getting into unheroic situations with enemies in the water who surge forth with the fury of high-powered animation effects, and banters with Moana.

The quip-controlled conversations between the two unlikely co-voyagers as they sail to Tahiti brims with dime-store wisdom and a designer gusto that would impress those who believe Disney is the domain of fortune-cookie wisdom and electioneering humour.

Some sections of the global viewership would probably love Moana’s domineering attitude towards the godly hulk as they sail together. She treats the bulky Maui with a mixture of childlike infection and a collateral contempt. This barrage of at-sea banter is engaging for starters. But soon gets tiresome as you realise that the co-directors are merely holding back the inevitable finale where family values and ecological equilibrium are magically restored.

This is a film that is constantly looking for approval.

We can all applaud the film’s dazzling display of oceanic spectacle, and the voiced lucidity of Dwayne Johnson and Auli’i Cravalho (who speaks for Moana). But we have seen it all too many times in Hindi films — the singing, dancing, family partings and reunions, even the bonding with the grandmother — to be impressed beyond a point.

Yes, the one thing that I was truly impressed by was the frequent bursts into lip-sync songs. There is some spirited singing by Louise Bush. It’s a Bollywood tradition tragically on the wane in Hindi cinema. Funny, how we love bouts of Bollywood in American cinema even as our own cinema rejects all Bollywood tradition for a more European and American approach to singing and other dramatic devices.

“Moana” is a well-intended captivatingly crafted animation film with impeccable spatial harmony. What it lacks is a darker edge to underpin the eye-blazing sunshine that sweeps across the film.

A Suitable Boy Gets Mixed Response

Exports to China come to the rescue India’s aluminium sector