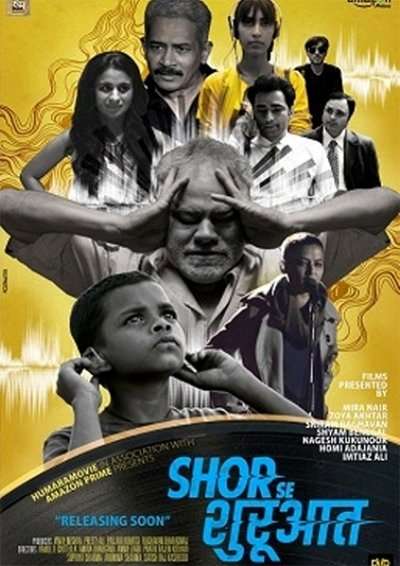 “Shor Se Shuruaat” is an anthology of seven indie shorts, whose fledgling directors were hand-picked and mentored by veterans of the Hindi film industry. Released under the HumaraMovie banner, the title of the film is an apt self-proclamation of creating the buzz for its budding directors.

Each story, though different, deals with human emotions, but they are bound by a common theme – “Shor” or noise. And every film has the distinct flavour of its mentor.

The film starts rolling with “Azad”. Directed by Rahul V Chittella and mentored by Mira Nair, it is a layered drama that is intensely narrated in a non-linear fashion. It is the tautly told story of a father-son relationship which also unravels the trials and tribulations of a principled man, who reluctantly becomes a columnist, writing under the pseudonym – Azad.

It is the back and forth narrative that gets a bit confusing at times. Atul Kulkarni as Vinod Durge and Sakshi Tanwar as his Muslim wife Zainab are an extension of themselves. And the character who essays their son Sameer, is competent.

With baited breath you wait for the second, “Aamer” — directed by Amira Bhargava and mentored by Zoya Akhtar. This one tells us the story of a deaf boy named Aamer, who lives on the streets of Mumbai. It is a slice of his life tale which reveals how, devoid of sound, he romances the city. In his endeavour to lead a normal life, Aamer with the help of his mother, acquires a hearing aid. After which, instead of being thrilled about being able to hear, how he is disappointed, forms the crux of this tale.

Though well executed in a formulaic graph, the film exhibits a sense of familiarity and thus loses out on the novelty factor. The little boy who plays Aamer is charming, but lacks charisma and thus fails to tug at your emotional chords.

The third film, “Decibel” — directed by Annie Zaidi and mentored by Sriram Raghavan — is set in a dystopian society, in the future, where citizens are forced to live within a minimum audible threshold. The story follows a girl who is craving for sounds like in the “good-ole days”.

Treated as a science fiction in a synthetic atmosphere, the film seems a tad superficial with a pretentious and absurd tale. On the performance front, the actors essay their parts effortlessly.

“Hello Hello”, directed by Pratik Rajen Kotari and mentored by Shyam Benegal, is an intelligently scripted satire about consumerism. It showcases the noise created by competing organisations to lure consumers. Strategically placed in the anthology, the film, brings with it nuggets of light moments that elevate the sagging viewing spirit.

With an undoubtedly intense performance from Sanjay Mishra, as a convict in solitary confinement, waiting patiently with hope and silence before he is marched to the gallows, the film “Dhvani” — directed by Supriya Sharma and mentored by Nagesh Kukunoor is astutely handled, and the prisoner’s anxiety is palpable.

Treated as a fairy tale, “Yellow Tin Can Telephone”, directed by Arunima Sharma and mentored by Homi Adajania, is the tale of a unique boy and a girl whose lives are diametrically opposite. She suffers from an overdeveloped sense of hearing and he from an overdeveloped sense in association with colours. How their paths cross and they trade their secrets, forms the crux of this tale.

Creatively mounted in a montage narrative, the film is layered with glossed up frames and a verbose and lyrical narrative. The story may seem strange and silly but nevertheless, you cannot dismiss this film.

The final film in English, “Mia I’m”, directed by Satish Raj and mentored by Imtiaz Ali, is packed with a strong message targeting the youth of today. It is the story of Mia, who, lured with promises of a bright romantic future is forced to live like a ghost, because she is emotionally dead. How she takes charge of her life after her trauma, forms the crux of this tale. The film is motivational with an upbeat spirit.

All films, made on moderate production values, excel in the technical aspects, especially the sound department.

Overall, this film is worth a watch to encourage these budding directors and to know the type of films these directors will churn out in future.