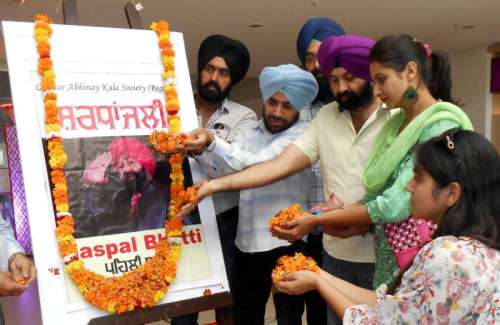 His tragic and untimely death in a car crash nearly two years ago made millions sad but even in his death, satirist-actor Jaspal Bhatti continues to inspire others. This is perhaps the only case in the world that a celebrity has became brand ambassador for a cause after his death.

Bhatti, who tickled the funny bone of millions through his short satirical takes on television and street plays, has once again been roped in as brand ambassador by the Chandigarh traffic police to promote the wearing of seat belts. The police, which had named him as their brand ambassador last October, his first death anniversary, had taken his name off in March after his widow, Savita Bhatti, became the Aam Aadmi Party (AAP) candidate for the Chandigarh Lok Sabha seat.

Even though Savita Bhatti withdrew from the political fray within a week, the police took nearly six months to restore Bhatti as their brand ambassador.

Bhatti and another PR professional, Navnit Joshi, were killed after their car hit a tree near Jalandhar Oct 25, 2012. Both were on the rear seat of the luxury Honda Accord car and were not wearing seat belts. Bhatti’s son Jasraj was driving the car. He and another passenger on the front seat, both wearing seat belts, were saved.

More recently, BJP leader Gopinath Munde, a minister in the newly sworn in government of Prime Minister Narendra Modi, died after his car was hit by another in the national capital. Munde also was on the rear seat and was not wearing a seat belt.)

“Bhatti-ji is perhaps the only person in the world to become brand ambassador for a cause after death. Despite not being there, he continues to inspire others. He was from the ordinary and always stood up for good things,” Savita Bhatti told IANS.

The city traffic police too are happy that Bhatti is back as brand ambassador.

“Mr. Bhatti has been again made the brand ambassador of the Chandigarh traffic police till November 1, 2014, as per the original agreement. The agreement would be extended if the family members are interested,” Chandigarh’s senior superintendent of police (Traffic) Maneesh Chaudhary said.

“If a message on road safety and abiding by rules is given by a celebrity, it matters a lot and the reach increases. Bhatti had to pay with his life in a road accident, as he was not wearing a seat belt sitting on the rear seat,” Chaudhary had said earlier.

Savita Bhatti says that she now intends to get more actively involved with the cause.

“My goal is clear. Jaspal-ji should live on. The Chandigarh traffic police took him as brand ambassador even after his death as they believed that he could deliver,” Savita Bhatti, herself an actor, said.

Comedy’s famous ‘Sardar’, Bhatti, an electrical engineer by training, raised social issues through his satirical spoofs. He was well known for his TV shows “Ulta-Pulta”, “Flop Show” and others. He also set up the “Nonsense Club” in 1982 while studying for his engineering degree, to highlight social issues.