Troy Ribeiro says the movie is an over embellished detective thriller 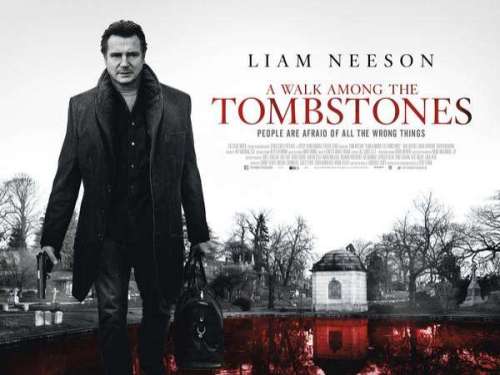 Film: “A Walk Among The Tombstones”; Cast: Liam Neeson, Dan Stevens, Boyd Holbrook, David Harbour, Adam David Thompson, Brian “Astro” Bradley, Olafur Darri Olafsson, Sebastian Roche, Mark Consuelos, and Danielle Rose Russell; Director: Scott Frank; Rating: ***
An adaptation of Lawrence Block’s novel, director Scott Frank’s “A Walk Among The Tombstones” is a conventional detective thriller that is stylishly put together in a carelessly ensemble fashion.
Embellished with sub-plots that form back-stories to practically every character, overeggs the story, making the jig-saw conundrum stand out in parts.
The tense opening scene set in 1991 provides the back-story of the unlicensed private investigator, Matthew Scudder (Liam Neeson) who gave up drinks and his career when his shootout with some gun wielding thugs on the streets of New York City went tragically awry.
The narration shifts to 1999. Scudder is enrolled in the Alcoholics Anonymous. A fellow addict Peter Kristo (Boyd Holbrook) introduces Scudder to his drug trafficker brother, Kenny Kristo (Dan Stevens) whose wife was kidnapped and killed in spite of him having paid $400,000 as ransom.
Now, seething with vengeance and without any legal involvement, Kenny is keen that Scudder helps him identify the culprits. It is after much reluctance that Scudder accepts the assignment.
Meanwhile, the remains of another female victim are found in the park in Brooklyn’s Greenwood Cemetery. It is through the cemetery’s creepy ground-keeper (Olafur Darri Olafsson) that Scudder learns the identity of the serial killers. But it’s the kidnapping of Lucia, the young daughter of a Russian drug dealer (Sebastian Roche) that brings him in a direct face-off with the serial psychopaths.
It is the tense negotiations and the violent set-pieces in the gory atmospheric climax that give the film its memorable moments.
With good production values, the visuals of Scudder’s world is impressively captured, with long, sharply composed, static shots by cinematographer Mihai Malaimare Jr. And the viewing is enhanced by composer Carlos Rafael Rivera’s unexpectedly melodic background score.
It is an out-and-out Liam Neeson film and the actor plays the glum ageing ex-cop to near perfection. He is assisted by TJ (Brian “Astro” Bradley), a homeless teenager who aspires to become an investigator one day. Their interaction in the library or on the streets seems strained, forced and obligatory for the script to proceed.
There are no strong female characters in the film.
The psychopaths posing as DEA agents, played by David Harbour and Adam David Thompson, are marginally developed as characters. Their motive remains consistently vague and comes to nothing during the finale, which ends up diluting the menacing effect they were supposed to exude.
The uncalled for elaborate back-stories with emotional drama along with sporadic bouts of pulpy dialogues, which include the Y2K compliance and dark humour, break the severity of the plot progression.
Similarly, the interpolation of the Alcoholic Anonymous’ 12 steps in the final showdown fails to create an emotional impact.
Overall, the elaborate plot with thematic concerns, from alcoholism and gun control to the nature of vengeance and jealousy, are nothing more than window dressing for this detective story.