Guillermo del Toro, who faces a copyright infringement lawsuit for “The Shape Of Water”, has won the Best Director and Best Picture Academy Awards for the movie at the 90th Oscars ceremony in Los Angeles….reports Asian Lite News

Guillermo del Toro, who faces a copyright infringement lawsuit for “The Shape Of Water”, has won the Best Director and Best Picture Academy Awards for the movie at the 90th Oscars ceremony here.

“The Shape of Water”, a fantasy drama, has been in the midst of allegations that it is a copy of a 1969 play “Let Me Hear You Whisper”.

The film stars Sally Hawkins as a mute cleaner working in a Cold War-era lab facility, who bonds with a sea creature being kept there.

It dominated the Academy Awards’ nomination pack with nods in a maximum of 13 categories this year.

The Achievement in Directing nomination was de Toro’s first in this category and his fourth overall. He also won the Best Picture, and was nominated in the Original Screenplay category this year.

He became the third Mexican filmmaker in the last five years to win best director, after Alfonso Cuaron for “Gravity” in 2014 and Alejandro Gonzalez Inarritu for “Birdman” and “The Revenant” in 2015 and 2016 respectively.

In his acceptance speech, del Toro said: “I am an immigrant like Alfonso and Alejandro, my compadres. Like Gael (Garcia Bernal), like Salma (Hayek) and like many, many of you. And in the last 25 years, I’ve been living in a country all of our own.

“Part of it is here, part of it is in Europe, part of it is everywhere. Because I think that the greatest thing our art does and our industry does is to erase the lines in the sand. We should continue doing that when the world tells us to make them deeper.”

del Toro was earlier nominated for his original screenplay for “Pan’s Labyrinth” (2006). 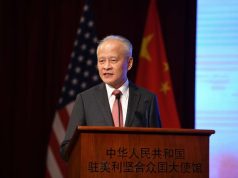