Each individual have different concepts about love and relationships….But what about philosopher’s thoughts on falling in love with someone? Book review by Vikas Datta about ‘Love Voltaire Us Apart’, written by Julia Edelman 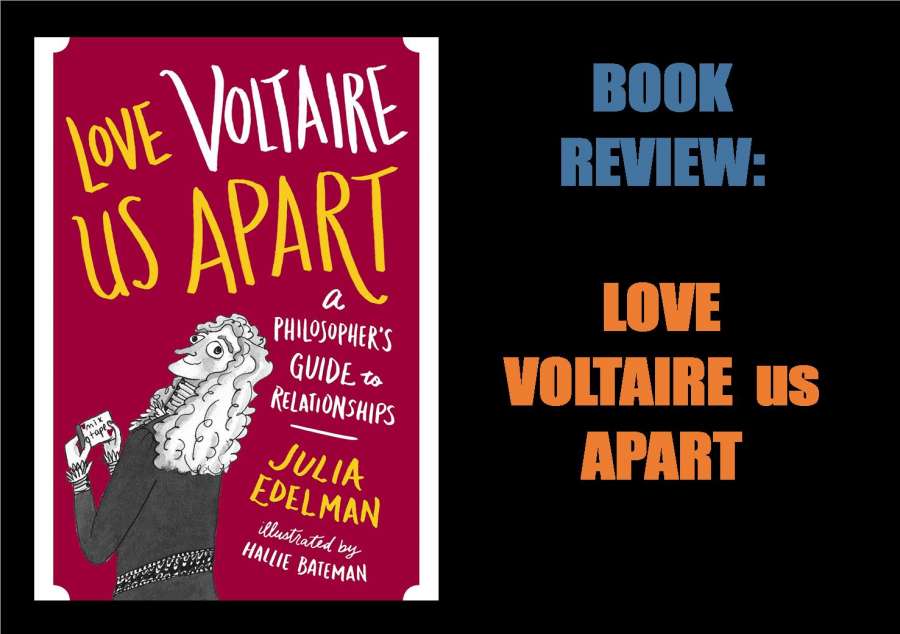 It is inexplicable, irresistible, makes the world go around, but its course may never run smooth. Falling in love with someone, somewhere, sometime is inevitable and so is some problem, big or small, emerging in the relationship. Advice may then be sought from friends, tarot readers, or relationship gurus in lifestyle magazines, but how about from top philosophers?

It may not be a very promising approach, since despite their unflagging focus on human problems, most philosophers live up to their name as uncompromising lovers of wisdom, with all other more tangible influences secondary. And then, their love lives were not particular noteworthy — or sometimes even non-existent, for that matter.

But still, for argument’s sake, if we had to approach them on this issue, how would they have responded?

Does the Socratic method extend to romance, or Plato’s Allegory of the Cave? Could Aristotle justify it by logic or Rene Descartes find a method for ascertaining romantic acquiescence? Could Albert Camus square it with the Absurdity that rules our existence or Karl Marx with dialectical materialism? Could Carl Gustav Jung extricate it from the collective psyche, or Nietzsche understand that though God was dead, was love?

Let this marvellously inventive writer and comedian from New York show you with a much expanded and diversified version of her “New Yorker” article “Excerpts from Philosopher’s Breakup Letters Throughout History”.

In this book, Julie Edelman adds advice from philosophers on relationships — starting, maintaining or breaking them — what some seminal quotes actually meant, pick-up lines from philosophers and thinkers across the entire spectrum of human existence. Apart from those mentioned above, they also range from Confucius to Ayn Rand, Immanuel Kant to Roland Barthes and Niccolo Machiavelli to Sigmund Freud — while two foremost contemporary philosophers also pitch in with their own contributions.

And there is much more too, all accompanied with some simply delightful illustrations by Los Angeles-based Bateman.

Edelman, who has also written for “Cosmopolitan”, “Playboy”, and “Vice”, says she began this book while in Montreal as it “was the dead of winter, and I continued to write only because my rough drafts fed the fire that allowed me to survive”.

“At the time, I was studying philosophy and while I should have been finishing essays for class, found myself writing about philosophers’ love lives instead. I liked thinking about Nietzsche’s love life or what Jean-Paul Sartre and Simone de Beauvoir’s breakup was like — and then I got the chance to turn these thoughts into a book.”

And the result has to seen to be believed — if you can control your mirth.

Whether it is John Locke telling the object of his adoration that her mind is a “blank slate” but he can “colour it with knowledge”, Kant, while sexting, informing his that he “was reflecting on the notion of aesthetic judgment and determined that **u r beautiful**”, Ayn Rand telling her beau that “objectifying” him will make her happy and Freud reciting to his beloved a dream about chasing a fox wearing a top hat which was about her.

There is also a quiz to ascertain your philosopher crush, a guide to alerting you if you face losing your relationship to imminent revolution, how to get over a break with a philosopher, what would romantic films starring philosophers instead be like (for example, “Pretty Woman” with Marx instead of Richard Gere, and “Annie Hall” with Freud rather than Woody Allen) and a brief glossary of related terms but defining both what it actually means and what you think it does.

Will this book be any useful to the love-lorn? It may depend on objective conditions but is undeniably a vivid and illuminating look at how this vital but unpredictable human condition can overwhelm the best minds of all and the truth of the Latin saying “Amare et sapere vix deo conceditur” or “to love and be wise is a (privilege) scarcely granted even to a god”.