Several prominent members from the British political, business and cultural sectors attended the annual Diwali event of Hindu Forum of Britain at Parliament 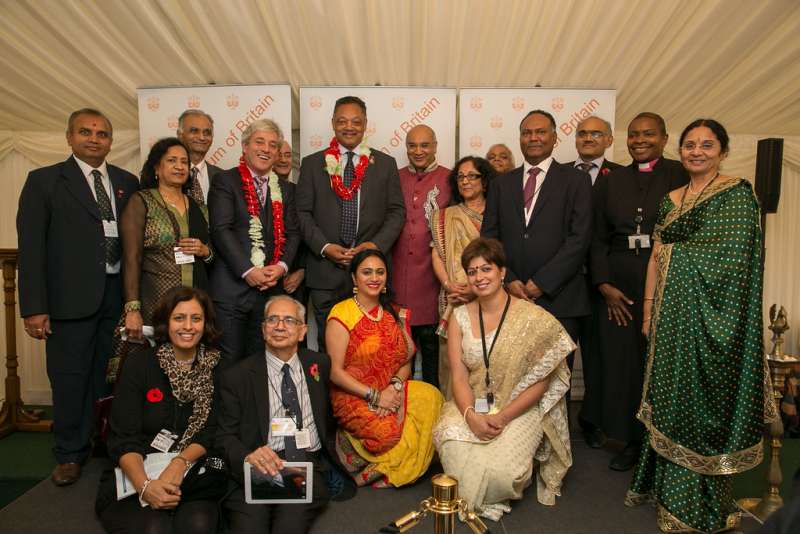 The 14th Diwali celebrations of Hindu Forum of Britain (HFB) were hosted grandly at the House of Commons.  HFB is the umbrella body representing more than 300 British Hindu member organisations and has the distinction of actively promoting capacity building, public policy and community consultation, The Terrace Pavilion was buzzing and beaming with VIPs and key dignitaries, traditional rituals, colourful outfits and cultural presentations. The well attended event was co-hosted by Bob Blackman MP and Keith Vaz MP and was supported by Caroline Lucas MP, Nigel Dodds MP and Angus Robertson MP.

Lighting of the lamp was done by H.E High Commissioner of India to the United Kingdom Ranjan Mathai and Minister of State for Employment Priti Patel, followed by each key invitee coming on to the stage and adding a small light.

Welcoming the guests Priti Patel said, “I would like to wish the Hindu Forum of Britain a very happy Diwali. As the Prime Minister’s Indian Diaspora Champion, I extend my best wishes to everyone in the Indian community here in the UK, and worldwide. I am continually inspired by the talent, ingenuity, and community spirit of the UK’s Indian diaspora, and by how active they are in helping further develop the already strong UK India relationship.”

High Commissioner Ranjan Mathai congratulated the organisers for hosting the brilliant Diwali celebrations at the Palace of Westminster and spoke about the much awaited visit of the Hon’ble Prime Minister Shri Narendra Modiji to the UK. President of Hindu Forum of Britain, the first woman President to the organisation ever, has rendered welcome address. An ancient Hindu prayer was recited by Bharatiya Vrundagaan, by Rakesh Joshi and team. Dignitaries on the stage highlighted the positive contributions of Hindu community to the nation in various fields such as business, economy, politics, education, culture and medicine.

In his speech, Chair of APPG for British Hindus Bob Blackman urged all to stand as a united front for each other in times of difficulty and proactively lobby their respective MPs present to highlight the issues faced by members of the Hindu community locally, nationally and internationally. He also expressed his hope to see a greater friendship between world’s largest democracy India and the oldest democracy Britain.

Mrs Ragasudha Vinjamuri-Rapatwar gave an eloquent and powerful classical performance on Devi Shakti, depicting the victory of righteous and good over evil, while another artiste Vindhya narrated the story from Ramayana in dance format. While Assistant Secretary General Panna Vekaria did the artiste introduction, Kapil Dudakia remained the wonderful Master of the Ceremony.