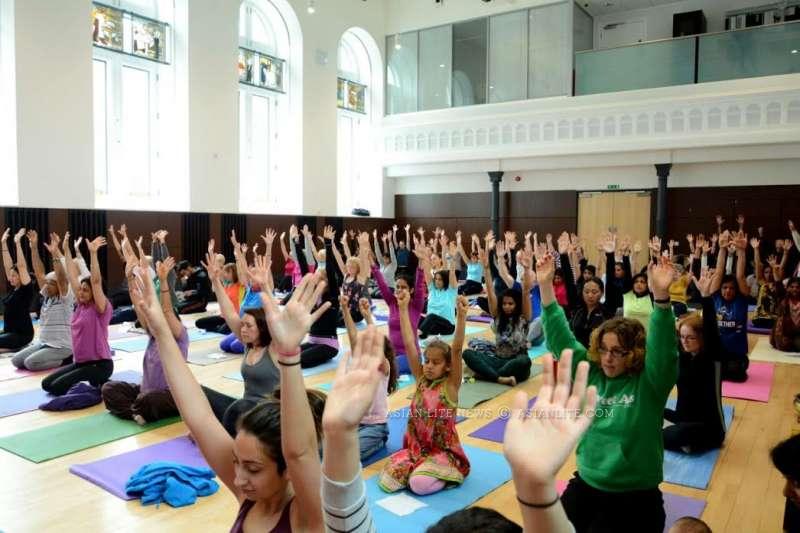 Yoga Day celebs at the Geeta Bhawan Mandir in Manchester were organized by the Vishwa Hindu Parishad, with the help of other institutions including Hindu Swayamsevak Sangh, Art of Living Foundation, and the Vedic Institute of Indian Culture and Education (VOICE).

Dr G Bhan, Chair, Vishwa Hindu Parishad said “In December 2011, spiritual leaders from around the world, led by Sri Sri Ravi Shankar had given a call for the world to declare June 21, the day of the summer solstice, as International Yoga Day. It was followed at the UN by the Indian PM Narendra Modi which finally resulted in the Intl Yoga Day.’’

The VHP was celebrating its 50th anniversary integrating Yoga Day.

The day-long programme included presentations by several eminent speakers on various aspects of yoga, esp. its health promoting benefits, and how the yogic /holistic way of life helps promote and maintain our health, and expert yoga teachers who conducted practical sessions on yoga.

Towards the end, a group of youth from the Hindu Swayamsevak Sangh demonstrated Surya Namaskar – in which salutations were offered to the sun. This was followed by music yoga led by the Art of Living volunteers and the event concluded with a short session on meditation.

Through the day, around 200 people attended the event

In North Birmingham at Nirankari Bhavan in association with the Consulate General of India, Birmingham , Mr Sharma , took part in the yoga and other eminent yoga organizations were also present

Yoga protocol demonstration was led by  Raj and Rashmi Fulchand of Art of Living and another teacher from Patanjali .

The Leicester Art of Living team celebrated International Yoga Day at the Memorial Arch in the famous Victoria Park in Leicester, UK. The session consisted of Surya Namaskars (Sun Salutations), a session of powerful yoga asanas, dancing and a relaxing bathe in the beautiful sun! kids were also involved.

Scotland  and other locations at Woking , Surrey and Kent joined in to participate .

It is reported that 50 million across 132 countries had a day out with Art of Living yoga.   While India took the lead, The Art of Living volunteers from 132 countries across the globe marked the first-ever International Yoga day with equal fervor. As Paris added a unique twist to the day by practicing yoga on boats across the river Seine; Nepal rose with the world to yoga in front of their iconic Pashupatinath temple. China too joined in with over 500 students exploring yoga at the Peking University. Many countries like Russia, South America, UAE, Germany, Indonesia, Malaysia, Thailand, Singapore, Japan, Kuwait, Jordan and Sri Lanka contributed with their enthusiastic participation.

Multiple cities in Russia, South America, Europe, Africa and Asia took to celebrating the day with a lot of zeal and passion.

“Yoga is something that can unite people across the globe, across nations, across religious divides. Yoga is not just about asanas; it is a state of mind where you have a sense of belongingness, responsibility for the whole planet, and a sense of connectivity and harmony. What we need is humanness and humanness can blossom when people are free from stress, tension and depression,” says Sri Sri Ravi Shankar, founder of The Art of Living

As the keynote speaker, Sri Sri presided over the UN celebrations of the International Day of Yoga at the UN headquarters in New York. India’s minister for external affairs, Sushma Swaraj, UN Secretary General, Ban-ki-Moon were also be present at the event.

In a separate event later today, Sri Sri will also addressed 5500 New Yorkers at the Lincoln center on the topic: ‘Yoga – a New Dimension’

The embracing of yoga around the world is a warm testimony to yoga’s unique international phenomenon.

Claps to boost the morale of NHS Staff