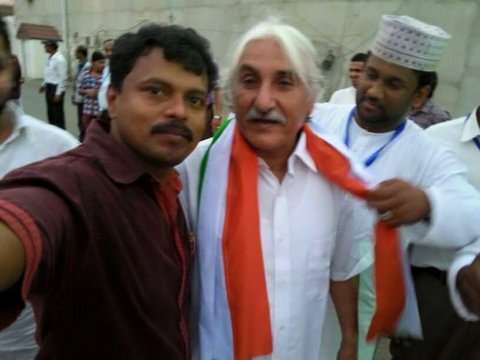 Poor Hassan. He is abandoning his quite retirement days to attend the gatherings of Keralite community almost everyday. The other day it was Aruvikkara bye-election victory celebrations organised by Overseas Indian Cultural congress (O.I.C.C). Then he attended an Iftar party hosted by central committee of O.I.C.C at Jizan, border town of Saudi Arabia.

It all began a month ago when someone posted his picture on the social media. It went viral due to his likeness to Chandy. Soon, the Saudi was spotted by a few Keralites who showed him the picture of Chandy. Now, the Congress leader’s Saudi doppelganger is planning to visit Kerala to meet the Chief Minister.

Al-Assiri has a striking resemblance to the Kerala CM that is accentuated by grey hair and long nose, completed by a similar grey moustache and a carbon-copy smile. One cannot help but gawp at Hassan, for similarities between the two are so striking that it is nearly impossible to differentiate one from the other. An amused Al-Assiri expressed his desire to meet Chandy after he came to know of his picture going viral. He discussed this matter with his Keralite friends Faizal, Noufal and Latheef.

A close aide of Chandy said that the chief minister was also dumbfounded when he was shown pictures of Al-Assiri.

“The chief minister would be only glad to meet Al-Asiri if he wishes to come here to meet him (Chandy),” said the aide of Chandy.

He will be leaving for the southern Indian state of Kerala later this month to meet the Indian leader. Al-Asiri is expected to arrive in Kerala after the ongoing holy month of Ramadan is over. Recently, a Chandy look-alike was also spotted in Canada. While the ‘Chandy’ from Canada was clad in a tracksuit and had a cap, the Saudi man with shining grey hair is seen in a ‘Kandoora’, the typical Arabian costume.