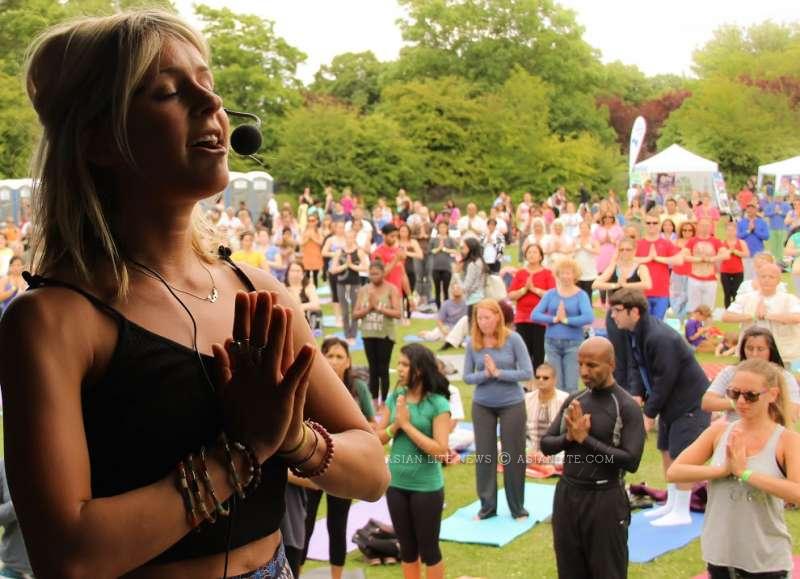 Hundreds of yoga enthusiasts took over London’s Southbank, at Bernie Spain Gardens, attending a series of free yoga classes hosted by India Tourism and the High Commission of India in celebration of International Day of Yoga.

With classes suitable for all abilities and ages, the day provided yoga sessions taught by some of the yoga-world’s most inspirational instructors, starting with a short Hatha (breathing) yoga class and family yoga class by the British Wheel of Yoga, an iMeditate session with Art of Living before finishing with a yoga class by Sivananda Yoga Vedanta Centre.

Mr Ranjan Mathai, India High Commissioner to the UK said, “With the British Wheel of Yoga as our partner, the High Commission of India launched celebrations to mark International Day of Yoga on June 21.  This is one of at least 35 major events taking place across the UK and we are thrilled that yoga will now be seen by millions more in the UK, beyond the millions who already benefit from it.   This gift from India will now become universal.”

At another event several community organisations and yoga experts met at Alexandria Palace in London  to celebrate Yoga. Alexandra Palace hosted the flagship free event for England’s capital city, which was set to be a truly spectacular launch into a powerful annual tradition.

The day was carefully pieced together by world class organisations from all over the UK to deliver the most sensational display of yoga this city has ever seen, assure the oragnisers.

FREE yoga & Meditation was hosted in the beautiful grounds of Alexandra Palace (from 8am). The day was led by some of the country’s leading yoga teachers as people gave  salute to the sun on the longest day of the year.

The day was a great opportunity to introduce someone new to yoga as there were plenty of classes for all experience levels including beginners.

It was the BIGGEST FREE outdoor yoga event. 80 free yoga and meditation classes featuring some of the biggest names in yoga joined hands from 8.00am until 8.00pm. The highlight of the event was the Yoga Jam The creative fusion of contemporary beats & rhythms with ancient Sanskrit mantras, yoga & meditation led by the Art of Living team.