President Donald Trump has overall been an effective leader of the US, despite unceasing pressure on him that concluded in the abortive bid to remove him from office through impeachment. However, some of his decisions have shown a disregard for long-term US interests, such as the withdrawals from Kurdistan and Afghanistan.

In both instances, after the US military had been getting substantial help from local allies, the latter were abandoned to their worst foes. It is doubtful that the Kurds (or indeed the greater region) will any longer trust in US promises, or in Washington’s willingness to show gratitude for favours received in the past that continue into the present. The sell-out of the Kurds appears to have been at the behest of Senator Lindsey Graham, whose “friendly ties” to the Emirate of Qatar are well known both in his home state as well as in Washington, although unlike “Moscow Mitch” McConnell, he has yet to be called “Doha Lindsey”.

Trump’s embrace of R.T. Erdogan must have warmed the hearts of the Turkish strongman’s backers in Doha, while Graham and another US Senator, Chris Van Hollen, appear to have balked at introducing the Graham-Van Hollen bill in the US Senate. They were obviously afraid that it may get passed with a veto-proof majority and annoy Erdogan and the only US Representative who voted against the near-unanimous backing for a similar sanctions bill against Turkey in the House of Representatives, Ilhan Omar, another admirer of Erdogan, despite her claims of following a Left-Liberal ideology. The about turn by Van Hollen and Graham has been good news for Moscow, which can now safely go ahead with finding new markets for its expensive but effective S-400 air defence system.

While going in for the S-400, the Narendra Modi government calculated that the sanctions threatened in public and private by several dozen US officials (including the Secretaries of State and Defense) would fail to materialise, and the wager seems to have paid off. US officials have been voluble that the Kurds are in the throes of ecstasy at having been forced by Trump to surrender their forward defence line and have their second-worst enemy, Erdogan (the first having been Abubakr Al-Baghdadi, now in his afterlife) gain the upper hand in his battle to eliminate them.

This is as believable as the remark that the Taliban (to whom President Trump has surrendered after a lengthy and costly war in a formal treaty) would “fight Al Qaeda on steroids” as a consequence of such a surrender. Mike Pompeo, who made this statement, has thereby shown that he has a deeply ironic sense of humour, given that Al Qaeda, ISIS as well as the terror groups nurtured by GHQ Rawalpindi have always—repeat, always—found a refuge in those parts of Afghanistan controlled by the Taliban. And what of the elected government in Kabul? Washington has made outrageous demands, such as that it release the 5,000 Taliban desperadoes in its prisons so that these newfound US partners can return to cut the throats of the members of the Afghan government.

US special envoy Zalmay Khalilzad seems to have finalised the US draft of the agreement entirely out of notes handed over by the Taliban, for the latter make no promises at all for getting US forces out of the country and threaten the Afghan government with dire consequences unless they—in effect—hand Afghanistan back to the Taliban.

Judging by their published responses to the absurdly labelled “peace plan” between the US and themselves, the Taliban have not been coy in declaring that they are of the same mindset and with the same objectives as when President Bill Clinton helped to install them in power in Kabul in 1996. Now a US President who claims to find the Clintons toxic is following in the path of the 42nd President of the United States. Should the Ghani government release even a fraction of the 5,000 jailed terrorists as demanded by both the Taliban and the US administration, it would be a catastrophe for Afghanistan.

The Afghan National Army (ANA) is already facing a determined campaign by the ISI, the Taliban and the financial backers of the latter in the region. This well-funded drive is intended to secretly win over commanders, so that what took place in Iraq (when commander after commander of the Iraqi army surrendered to ISIS without a fight in 2014, thereby gifting Al Baghdadi vast territories, terrified citizens and stores of weapons) gets repeated in Afghanistan once US forces almost entirely leave the ANA to its fate. 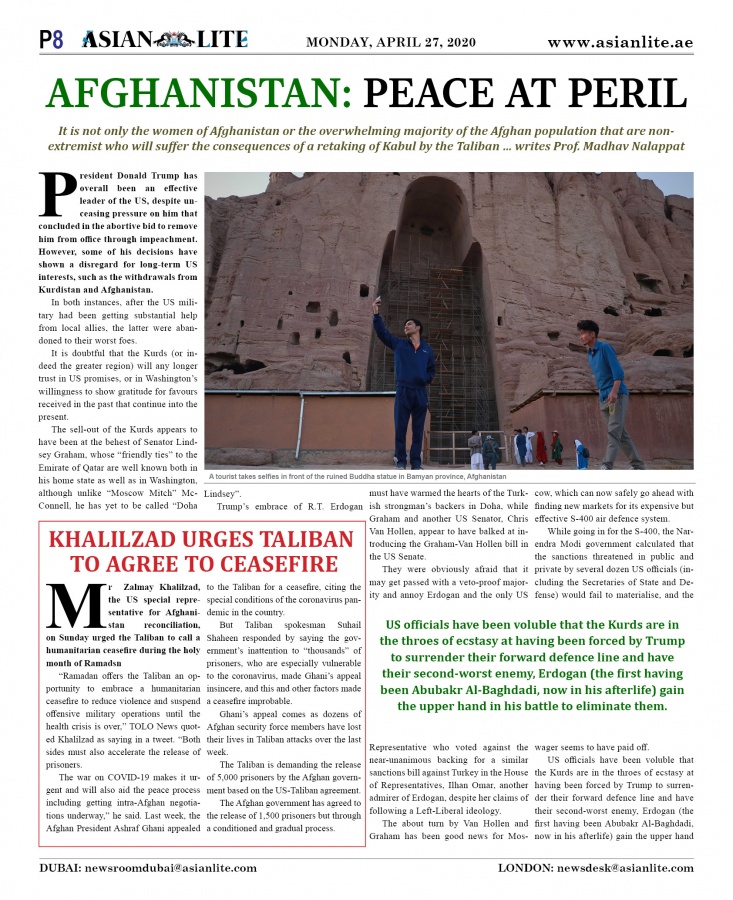 Giving back even a few such prisoners to the Taliban would ensure that their drive to generate treachery within the ANA picks up speed, even as morale falls to sub-zero levels. It would also cause panic among the moderate majority within the Afghan population, as the danger of a Taliban takeover arrives at their doorstep courtesy President Donald J. Trump. While Barack Obama at least sought to discern elements of moderation within the Taliban (in a search similar to that of bleeding hearts everywhere for “good” terrorists), Trump apparently does not care that his newfound friends are going to once again imprison women inside their homes, cut the throats of the tens of thousands who refuse to become their slaves.

Should they come to know what her husband and father’s newfound allies have in mind for the women of Afghanistan, hopefully Melania Trump and Ivanka Kushner will make their distaste clear of this sell-out of human rights and values by President Trump, if nothing else. 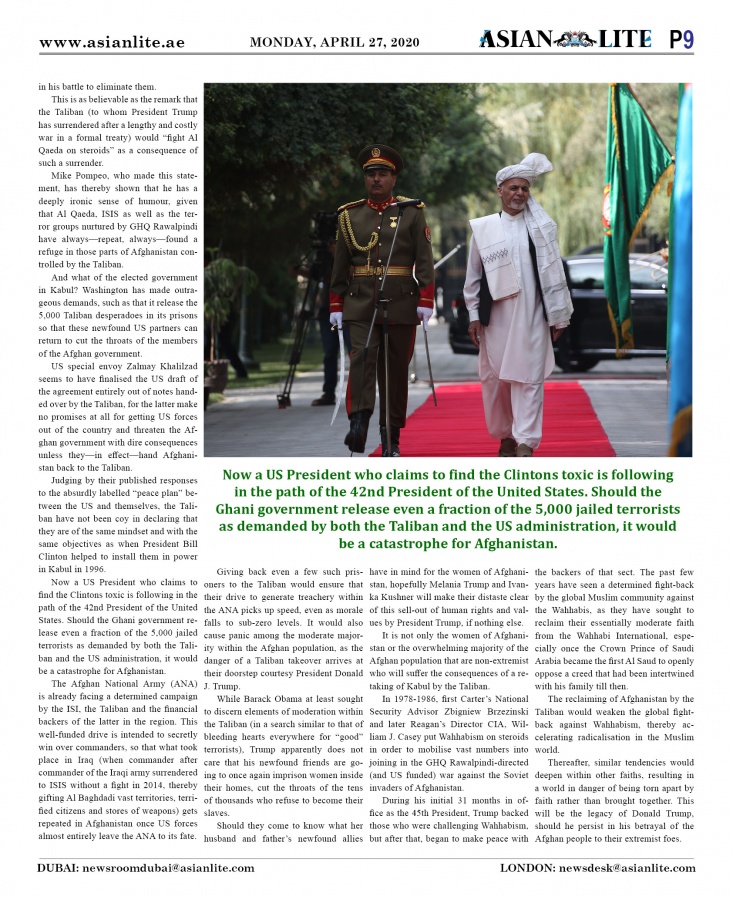 It is not only the women of Afghanistan or the overwhelming majority of the Afghan population that are non-extremist who will suffer the consequences of a retaking of Kabul by the Taliban. In 1978-1986, first Carter’s National Security Advisor Zbigniew Brzezinski and later Reagan’s Director CIA, William J. Casey put Wahhabism on steroids in order to mobilise vast numbers into joining in the GHQ Rawalpindi-directed (and US funded) war against the Soviet invaders of Afghanistan. During his initial 31 months in office as the 45th President, Trump backed those who were challenging Wahhabism, but after that, began to make peace with the backers of that sect. The past few years have seen a determined fight-back by the global Muslim community against the Wahhabis, as they have sought to reclaim their essentially moderate faith from the Wahhabi International, especially once the Crown Prince of Saudi Arabia became the first Al Saud to openly oppose a creed that had been intertwined with his family till then. The reclaiming of Afghanistan by the Taliban would weaken the global fight-back against Wahhabism, thereby accelerating radicalisation in the Muslim world. Thereafter, similar tendencies would deepen within other faiths, resulting in a world in danger of being torn apart by faith rather than brought together. This will be the legacy of Donald Trump, should he persist in his betrayal of the Afghan people to their extremist foes.