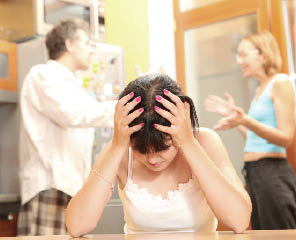 Do you often fight with partners, relatives and friends on trivial matters? Stop this immediately as frequent arguments in family or in neighbourhood may double the risk of death from any cause in middle age.

Frequent conflicts with anyone in the social circle are associated with a doubling to tripling in the risk of death from any cause compared with participants who said these incidents were rare, the study showed.

Men seemed to be particularly vulnerable to the worries and demands generated by their female partners.

To prove their point, the Danish researchers quizzed almost 10,000 men and women aged 36 to 52 about their everyday social relationships.

The researchers focused particularly on who, among partners, children, other relatives, friends and neighbours, made excess demands, prompted worries, or was a source of conflict, and how often these arose.

They also considered whether having a job made any difference.

The health of the study participants was tracked from 2000 to the end of 2011, using data from the Danish Cause of Death Registry.

Almost half the deaths were from cancer, while heart disease/stroke, liver disease, and accidents and suicide made up the rest.

Around one in 10 study participants said that their partner or children were a frequent or constant source of excess demands and worries; around one in 20 (6 percent) and a further 2 percent claimed this for relatives and friends, respectively.

Similarly, 6 percent had frequent arguments with their partner or children, 2 percent with other relatives, and 1 percent with friends or neighbours, the research revealed.

Constant arguing seemed to be the most harmful for health.

Being out of work seemed to amplify the negative impact of social relationship stressors.

“The evidence suggests that supportive social networks and strong relationships are good for general health and wellbeing,” the researchers noted in a paper appeared in the Journal of Epidemiology & Community Health.