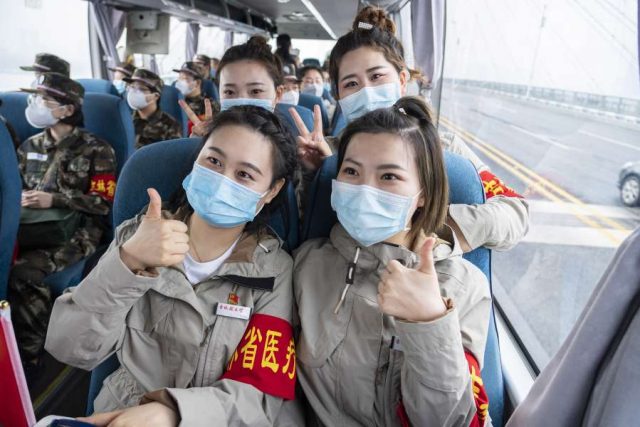 The Xi Jinping government which controls all the news and information, claims that 3,270 people have died and 81,093 infected in China due to COVID-19, which originated in Wuhan city of Hubei province. However, several Chinese civilians have leaked out videos and documents disputing these numbers, with many pointing to the drop in cellphone users by 21 million in the last three months…. Reports AARTI TIKOO SINGH

The number of casualties in China due to the novel coronavirus pandemic may be way higher than the official figure that the Chinese Communist Party regime has released.

The Xi Jinping government which controls all the news and information, claims that 3,270 people have died and 81,093 infected in China due to COVID-19, which originated in Wuhan city of Hubei province. However, several Chinese civilians have leaked out videos and documents disputing these numbers, with many pointing to the drop in cellphone users by 21 million in the last three months.

A Chinese blogger based in New York, Jennifer Zeng posted the official monthly data released on March 19, showing the number of cellphone users decreased from 1.600957 billion to 1.579927 billion in February 2020. Similarly, the number of landline users reduced from 190.83 million to 189.99 million, a drop of 840,000 last month.

Compared with the data, which was released on December 18, 2019, for November 2019 data, both cellphone and landline users dropped dramatically. Last year too, for the same month, the number of cell phones had increased by 24.37 million and the number of landline users had gone up by 6.641 million.

Zeng insinuated the drop could be due to the closing of accounts due to coronavirus-related deaths.

A US-based independent news media run by American Chinese, The Epoch Times, in a detailed report described how cellphones are an indispensable part of life in China due very high level of digitization in every sphere of life controlled by the government.

On December 1, 2019, China made facial scans to confirm the identity of the person who registered the phone mandatory. The newspaper quoted the operation data of all three Chinese cellphone carriers, which showed that cellphone accounts increased in December 2019 but dropped steeply since the outbreak of novel coronavirus.

China Mobile, the largest carrier in the country, holding about 60 percent of the Chinese cellphone market, gained 3.732 million more accounts in December 2019 after the facial scan requirement, but lost 0.862 million in January 2020 and 7.254 million in February 2020.

The 2020 decrease in landline users may be due to the nationwide quarantine in February, during which small businesses were shut down. The economic slowdown, dislocation of workers caused by shutdowns in China may have also led some people who have an extra cellphone to cancel it. If only 10 per cent of the cellphone accounts were closed due to coronavirus deaths, the death toll would be 2 million, the newspaper said.

A comparison with the situation in Italy also suggests the Chinese death toll is significantly underreported. The mortality rate in Italy so far has been nine per cent while in China where a much larger population was exposed to the virus, it is only 4 per cent.

Activities in Hubei province, the epicenter of the novel coronavirus seem to contradict the reported death toll in China. The seven funeral homes in the city of Wuhan were reported to be burning bodies 24 hours a day, seven days a week in late January. Hubei Province has used 40 mobile crematoria, each capable of burning five tons of medical waste and bodies a day, since February 16.

“The Chinese Communist Party’s cover-up and mismanagement allowed the virus to spread throughout China and create a global pandemic,” the Epoch Times wrote.