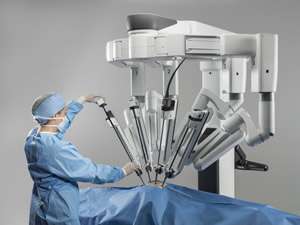 India has significant talent and expertise in traditional head and neck surgical procedures and the country is poised to take a giant leap with robot-assisted surgeries for head and neck patients in the days to come, a leading US robotic surgeon has said.

Dr. Chris Holsinger, 48, who leads Stanford Cancer Centre’s Head and Neck Oncology practice, have been interacting closely with the leading Indian head and neck oncologists since 2008.

“I would love to work with more hospitals in India and do collaborative work for providing succour to head and neck cancer patients,” Holsinger told IANS in an e-mail interview.

According to the Indian Council of Medical Research (ICMR), over 200,000 head and neck cancers are reported in the country each year. Of these, nearly three-fourths relate to cancer of the oral cavity, throat and voice box.

HPV negative is a more aggressive head and neck cancer and shows moderate response to radiotherapy.

“Since 95 percent of head and neck cancer patients in the US test positive for Human Papilloma Virus (HPV) which can be treated with radiotherapy, we are looking forward to results of this study,” Holsinger said.

When it comes to radiotherapy vs robotic surgery, he sees both of these treatment choices as complementary rather than competitive.

“In the US, we see better results for patients when a multi-disciplinary approach is used. In other words, both the surgeon and the radiation oncologists must be strong but flexible advocates for their patients,” the surgeon elaborated.

Consumption of tobacco in various forms – smoking, chewing of paan (betel leaf) and gutka – is a major contributor to head and neck cancer, especially oral cancer.

“Using tobacco and also consuming alcohol only further increase that risk. There are many genes now known to be associated with head and neck cancers but only rare inherited syndromes are associated with the disease,” said Holsinger, who was in New Delhi last week to attend a workshop.

“I, along with Dr. Surender Dabas (consultant surgical oncologist at RGCIRC), conducted two surgical procedures for the removal of cancerous tonsils,” he informed.

He also interacted with over 100 surgeons attending the second national workshop in transoral surgery at RGCIRC.

“Today, minimally invasive robotic surgery is a good way to start as it helps in preservation and restoration of thoracic functions, while retaining facial appearance. Radiotherapy works well for the neck region where the doctors may decide to go in for lower dose,” Dr. Holsinger explained.

Use of computer-assisted surgery (via a surgical robot) to remove cancerous tissues or tumours in the head and neck areas help the surgeon see the affected areas far more clearly which is not possible in open surgery.

“A surgical robot helps in accessing the head and neck area through the oral cavity (mouth) thus reducing trauma, pain and blood loss. Best of all, minimally invasive surgical procedures do not leave any scars on the face or neck and the recovery is much quicker,” the Stanford surgeon elaborated.

Any visible lesions, ulcers, difficulty in swallowing food, change in voice and pain in the ear present themselves as early signs of cancer.

India and the US, as also western Europe, have the highest incidences of oropharyngeal cancer (OPC) worldwide, ranging from seven-17 cases per 100,000 people.

“In the US, we are seeing an epidemic of these cancers, especially in the oropharynx, due to an association with the HPV, which may be rising in India as well,” Dr. Holsinger stated.