Bird photography as a hobby and profession has taken off to a major extent in India. It has led to important discoveries of species not previously known from the country, a globally renowned ornithologist said.

In his latest paper published in BirdingASIA, the biannual bulletin on Asian birds, Nature Conservation Foundation Scientist K.S. Gopi Sundar said the number of bird species in India is growing owing to improved genetic capabilities that have helped discern differences between birds that looked and sounded somewhat similar.

However, there is still a very slow growth in the understanding of individual species.

Autecology, or the science of how a species interacts with its surroundings, is the branch of ecology that assists scientists in determining where species are found and what they do.

For the vast majority of Indian bird species, this basic information is either absent or very poorly known, said Sundar, who is the Co-chair of the IUCN Stork, Ibis and Spoonbill Specialist Group.

Looking for a species for many years in multiple locations is the ideal way to improve knowledge of the species. But this takes time and more importantly resources that countries like India do not appear to be relegating to basic studies.

“Given this background, with some colleagues, I wanted to see if there are faster ways of improving knowledge of bird species using available resources that may not be being used as best as they could,” he said.

“It is quite common in the northern parts, even seen inside cities and in farmlands. Also, the bird is interesting in having three distinct colour forms that vary in the quantity of white and black on the bird. Not surprisingly, exceedingly little is known of the ecology and requirements of this species in India.”

The black-bellied form was new for the researchers and therefore mildly exciting.

The only available information on this form was in field guides that compile all and any information they can get on birds to make maps that help people interested in birds.

Field guides suggested that the black-bellied form was found only in a small patch in Pakistan along the Indus river during the winter.

“By then, we had seen the form in three different locations in Udaipur. We waited for another winter, and behold, the black-bellied form appeared again in all the three locations of Udaipur. Clearly, existing information on this form needed updating,” he said.

Bird photography as a hobby and profession has taken off to a major extent in India.

It has led to important discoveries of species not previously known from the country, and over-zealous photographers have also destroyed bird habitats and disturbed nesting birds.

But since the emergence of the internet, several institutions have set up forums for photographers to donate their images of birds, primarily to assist other people with identification.

“We scanned various portals for photographs of variable wheatears, and ended up with a database of over 540 photographers of the three forms that also had year and location,” he said.

“We created maps for all three forms and also assessed if any were being seem more in recent times. We discovered that our maps, created using photographs donated online by photographers, matched field guides only for one form. Two other forms of the variable wheatear were distributed much more widely than was suspected,” Sundar said. 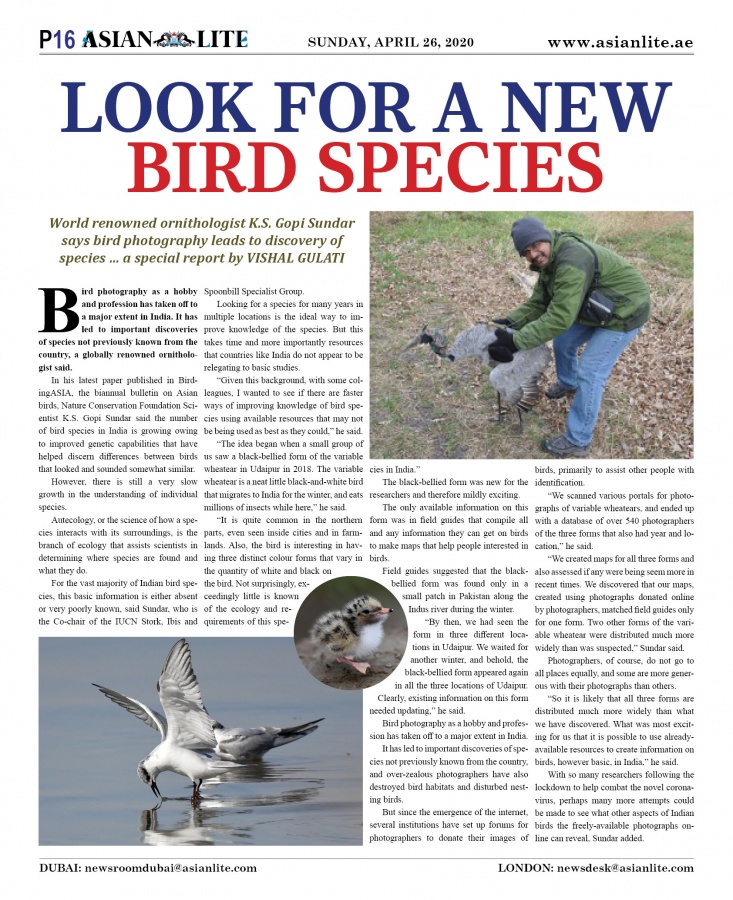 Photographers, of course, do not go to all places equally, and some are more generous with their photographs than others.

“So it is likely that all three forms are distributed much more widely than what we have discovered. What was most exciting for us that it is possible to use already-available resources to create information on birds, however basic, in India,” he said.

With so many researchers following the lockdown to help combat the novel coronavirus, perhaps many more attempts could be made to see what other aspects of Indian birds the freely-available photographs online can reveal, Sundar added.