The country has been one of the worst affected by the outbreak, with 198,674 officially registered cases, the second highest in the world after the US, and 20,453 deaths, reports Efe news.

Spain’s daily death rate has been declining, with 410 fatalities reported on Sunday, the lowest figure since March 22.

There has also been a downward trend in the number of hospitalisations and patients admitted to intensive care units.

Spain has one of the strictest confinement measures in Europe with adults only allowed to leave their homes individually to buy food or medicine, travel to work or walk their dogs.

Prime Minister Pedro Sanchez announced over the weekend that the restrictions would be relaxed and children would be allowed to go outside with their parents from April 27.

By this time youngsters in the country will have spent seven weeks inside their homes, which in the cities are often small apartments without any outdoor space.

The proposed de-escalation came amid growing political tensions, especially between the left-wing coalition government, formed by the Socialist Party (PSOE) and Unidas Podemos, and the conservative opposition Popular Party.

Sanchez was due to hold talks with PP leader Pablo Casado on Monday as part of a proposal by the Prime Minister for a national pact to deal with the economic and social fallout from the pandemic. 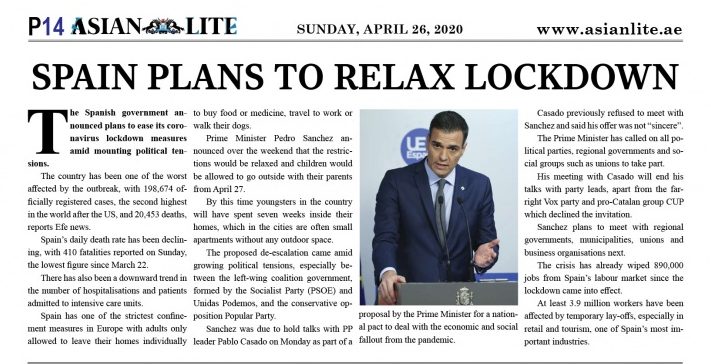 Casado previously refused to meet with Sanchez and said his offer was not “sincere”.

The Prime Minister has called on all political parties, regional governments and social groups such as unions to take part.

His meeting with Casado will end his talks with party leads, apart from the far-right Vox party and pro-Catalan group CUP which declined the invitation.

Sanchez plans to meet with regional governments, municipalities, unions and business organisations next.

The crisis has already wiped 890,000 jobs from Spain’s labour market since the lockdown came into effect.

At least 3.9 million workers have been affected by temporary lay-offs, especially in retail and tourism, one of Spain’s most important industries.