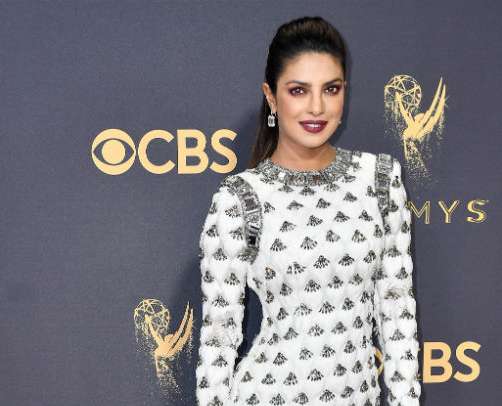 “Saturday Night Live”, which features Alec Baldwin doing an impression of Trump, won nine awards, while “Big Little Lies” and “The Handmaid’s Tale” — both of which tell engrossing tales on women — won eight honours each at the gala on Sunday night at the Microsoft Theatre, which saw Bollywood actress Priyanka Chopra as one of the presenters.

Politics remained at the forefront of the event, where former White House press secretary Sean Spicer made a surprise appearance.

When he said it was difficult to tell how many people would be watching the show, Spicer wheeled a podium onto the stage, and said: “This will be the largest audience to witness an Emmys — period, both in person and around the world.”

It was a clear reference was to Trump’s January 20 Inauguration Day claims, contradicted by photos, about how big the audience was for his oath-taking ceremony.

Colbert later blamed the Emmys for Trump’s election as President.

He suggested that if Trump had won an award for “The Apprentice” in 2009 he might not have run for President.

To support this, he even showed a clip of a presidential debate where Trump said he should have won an Emmy.

However, the digs didn’t stop there.

When Baldwin won the Outstanding Supporting Actor in a Comedy Series trophy for “Saturday Night Live” for impersonating Trump, he quipped: “I suppose I should say, at long last, Mr President, here is your Emmy.”

Three acting veterans — Dolly Parton, Jane Fonda and Lily Tomlin — the stars of the movie “Nine to Five” — commented on Trump without mentioning his name.

“Back in 1980 in that movie, we refused to be controlled by a sexist, egotistical, lying, hypocritical bigot,” Fonda said.

“And in 2017… We still refuse to be controlled by a sexist, egotistical, lying, hypocritical bigot,” Tomlin added.

Donald Glover, who won two Emmys for his work on “Atlanta”, said in his acceptance speech: “I want to thank Trump for making black people No. 1 on the most oppressed list. He’s the reason I’m probably up.”

Lena Waithe became the first African American woman to win an Emmy award for writing for a comedy series. She shared the award with Indian-American Aziz Ansari for co-writing the “Thanksgiving” episode of “Master of None”.

“For everybody out there that showed so much love, thank you for embracing us, a little Indian boy from South Carolina and black girl in the southtown of Chicago. We appreciate it more than you could ever know,” Waithe said.

Even Sterling K. Brown made history as he emerged as the first African-American to win Best Actor in a Drama Series at the Emmys in 19 years. He was lauded for “This Is Us”.

Besides this, issues of social significance saw prominence.

Celebrities like Kathryn Hahn, Judith Light and Elisabeth Moss made a statement by donning ribbons to support the American Civil Liberties Union (ACLU).

“Top Chef” host Padma Lakshmi, “Silicon Valley” star Kumail Nanjiani and his wife Emily V. Gordon, were also among those who wore the ribbons to support the civil rights organisation, which is in the spotlight due to its confrontations with the Trump administration over its policies.

“Orphan Black” star Tatiana Maslany also wore a blue pin, but for a different cause — her blue ampersand symbolised support for the Gay and Lesbian Alliance Against Defamation.

Meanwhile, Reese Witherspoon, who acted in and served as an executive producer on “Big Little Lies”, while accepting the Outstanding Limited Series honour, said: “It has been an incredible year for women, (to) bring women to the front of the stories.”