The trend of music singles is leading to the plummeting popularity of albums across the globe but Grammy Award winning English musician, DJ, and record producer Mark Ronson, who likes Indian classical music, says albums are still a “great form of art”.

“I think today people are careless about albums and they are streaming singles. To me, an album is still a great art form in music today… you know that everyone likes and enjoys,” Ronson told IANS in an email interaction from London.

Technology with new gadgets and software is helping tune in the music. But Ronson, who has produced for singers like Lily Allen and Adele and the late Amy Winehouse, firmly says that for his tracks, there’s no such support system.

“I love the sound of live musicians playing and it’s obvious that’s not what people do these days. I don’t use the same modern plug-ins technology and computer stuff that everybody uses because I don’t want my stuff to sound like everybody else’s.

“I also know that among my talent is the fact that I can record live instruments and make them sound like classic hip hop or whatever it is,” said the London-born Ronson, who gravitated towards hip-hop, funk, soul and R&B as a teenager.

Ronson’s single “Uptown funk”, a collaborative project with singer Bruno Mars, from his album “Uptown Special”, has a strong essence of music from the 1970s and 1980s, and it has clicked with music lovers.

The album has been written and produced by Jeff Bhasker and a majority of the album’s lyrics, except “Uptown funk”, have been penned by Pulitzer-winning American novelist Michael Chabon. The 39-year-old terms working on the album an enriching experience.

“I think with this album I really knew that I had to achieve. So it was great working with Mars, Jeff, Michael and all the others, we have spent some good time together and have learnt a lot from each other,” he said.

Since his first album “Here Comes the Fuzz” in 2003, Ronson has majorly climbed the ladder of success, going on to clinch the Grammy award for his works like 2008 Record Of The Year for “Rehab” with Amy Winehouse.

The acclaim and applause have given him the courage to take the road less travelled – and he has come out with great music.

“Yeah, my first album ‘Here Comes the Fuzz’ gave me a kickstart… critics loved it, and fans loved it too. This boosted me to make music I love, and enjoy. But I am still the same person you know – passionate about music, looking to explore new dimensions,” Ronson said.

He feels the journey since 2003 “has been extremely crucial throughout the years”.

“However, since 2003 with the first album launch, I have been learning and experimenting each time with my music,” he added.

“There’s some great music that I have heard of. Indian music is quite well-known and talked about. Also, there is a couple of Indian classical music schools extremely popular for the Indian flavour of music in Britain,” he said.

After wrapping up his fourth album “Uptown Special”, Ronson feels a void has been created, which will take some time to fill.

“I worked hard to finish the album, so it is kind of a relief to be done. I feel like I’m still working on it because it’s just such a new thing to realise that I’m finished with it,” he said. 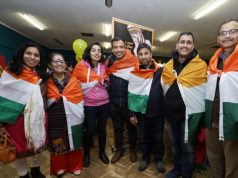 In pursuit of REACHing out