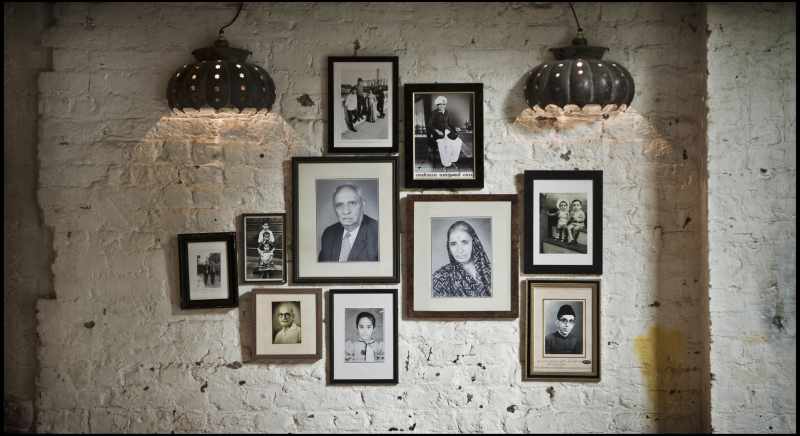 Joyeeta Basu of Asian Lite, UK’s No 1 newspaper for the Brtish Asians, looks in to Dishoom – one of the most favourite restaurants in London

Walking into Dishoom in Shoreditch feels a bit like stepping in to the 1970s of Mumbai. The restaurant is as if inherited from an eccentric Iranian uncle. Exposed overhead wires, nicotine-stained walls, low ceiling fans and marble-top tables – they are all authentic recreations of the original cafés in Mumbai.

Mr Kohinoor from Britannia & Company, one of the oldest Iranian cafés of Mumbai, could as easily be going around tables asking, “You know how old I am?’ Or doing his little jig; ‘Fresh Lime Soda nice and sweet, to beat the Bombay heat’.  “Once I saw him do it three different times,” says Shamil Thakrar as he finishes swaying his arms while singing the jig. Shamil co-owns Dishoom (there are two branches) with his cousin Kavi Thakrar. 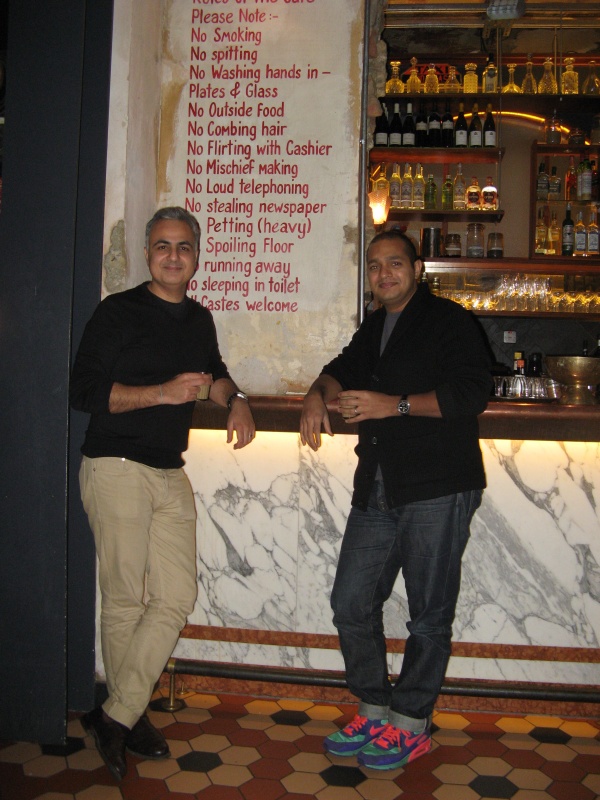 Explaining what inspired him to recreate the Mumbai restaurants in London, Shamil says: “Dishoom cannot be an Iranian café as we are not Iranians and this is not the 1930s of Bombay.  But what we are saying through Dishoom is that the cafés of Bombay are beautiful spaces that follow important philosophies. Dishoom is a tribute to that.”

By philosophy, Shamil speaks about the shared spaces that are a part of the cafés’ culture in Mumbai – where a rickshawwallah could be seated next to an MF Husain. “Laxmi Mittal who visits with his family, can be next to some poor student.” Breaking boundaries is important to them and he reiterates his point by drawing a religious parallel. “Our keema pav (a Muslim dish) could be by a pav bhaji (Hindu) or akuri (Zoroastrian) on the table, as they are in an Irani café.”  And in this spirit of brotherhood, the wi-fi at Dishoom called ‘chai-fi’, has no password and chai is topped up for free through the morning.

Dishoom is hugely popular with an hour’s wait-time in the evenings, serving about 10,000 customers per week. It is therefore surprising to learn that Shamil and Kavi do not have a background in hospitality. The Thakrar family have roots in Gujarat and 42-year-old Shamil used to work as a management consultant with Bain and Co after an MBA from Harvard Business School before he gave it all up. He now oversees design and marketing at Dishoom. Kavi, who handles day-to-day operations, had similarly studied at Edinburgh University and worked four years in World Bank before switching careers. 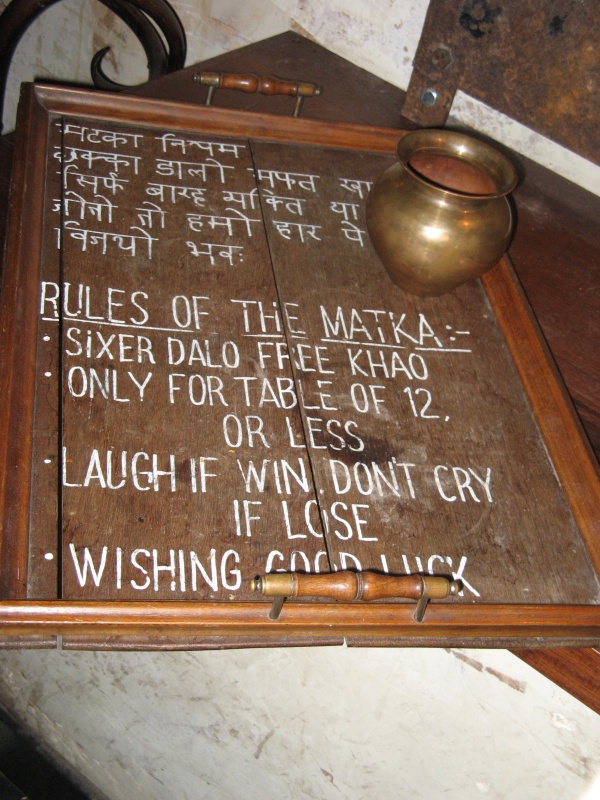 Though they may not have the relevant degrees, they have a deep connection to Mumbai. Shamil remembers visiting his grandmother’s home in King’s Circle and eating at Irani cafés when he was young. Kavi similarly, has relatives in Mumbai whom he visits often. “I remember visiting the cafés a lot and Dishoom is the realisation of a long-standing dream,” says Shamil.

And with Irani cafés fast disappearing in Mumbai, they felt it felt like a good story to share. So, the first branch of Dishoom opened in the bustling area of Covent Garden in 2010, followed by the more eccentrically designed Shoreditch branch in 2012. Both are characteristic recreations of Irani cafés, but with slight differences in design and menu to fit their different surroundings and clientele.

The interiors at Dishoom have been designed by Russell Sage, whose clientele include Michelin star chef Gordon Ramsey. He visited Mumbai for research and inspiration. “Russell is very English, so he gets India,” explains Shamil as he sits by a window that has a poem by the famous Indian author Nissim Ezekiel on Irani cafés hand painted on the glass. The font has been copied from Mumbai’s café B Merwan complete with its characteristic accentuated ‘R’. If the devil is in the details, then they certainly add up in Dishoom.

Dishoom’s menu is also replete with Mumbai’s comfort food — samosas, keema pau, vada pau, kebabs, biryanis (Chicken Berry Britannia), black dal, rajma-chawal to go with a Thumbs Up or Limca. They even have an in-house bakery where fresh, home-baked biscuits, pastries and puffs are always available. ‘From Nankhatai cookies to the perennial classic bun maska, the baked-goods are as you would expect them at Sassanian, B. Merwan or Kyani & Co’ claims Dishoom.

The restaurant has interesting references to the Mumbai cafés all over. The bar in Shoreditch is called the ‘Permit Room’ and cheekily, has a photograph of ‘party-pooping’ ex-assistant commissioner of Mumbai Police Vasant Dhoble next to a hockey stick. Dhoble had been responsible for shutting down dance bars in Mumbai. And to add insult to injury, there is also ‘The Dhoble’ – a breakfast cocktail.

Sonia’s Negroni (a reference to India’s Congress party president Sonia Gandhi), is a Bombay Dry gin and bitter Campari while Edwina’s Affair is the ‘hush-hush love triangle of gin, rose and cardamom’ — Edwina being the rose, Lord Louis Mountbatten the gin and Jawaharlal Nehru the cardamom. 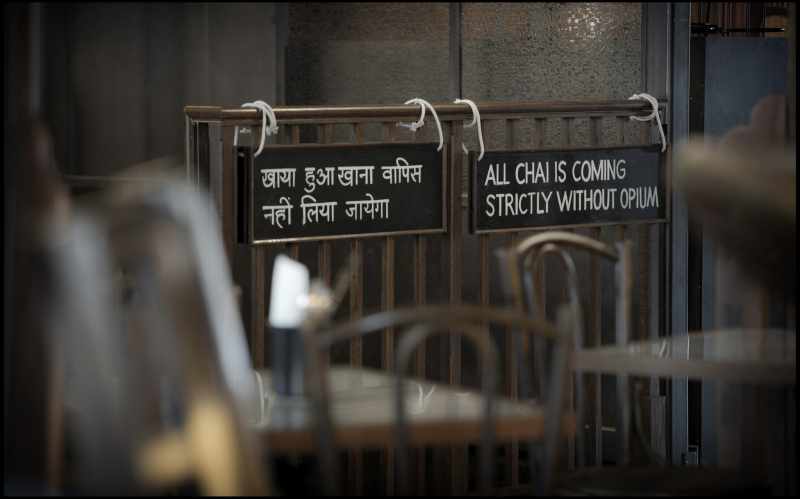 Cleverly, the humour works even if one does not fully understand the references. For example, a board reads: ‘All chai is coming strictly without opium’, referring to a 19th century rumour that Irani café owners were adding opium to the tea to get customers addicted.

There may be a third branch in the making, provided Shamil and Kavi have something original to say again. “As long as we do not dilute what we do or sacrifice quality we might start another branch,” says Shamil. And finally, why ‘Dishoom’? “We liked the energy to the name. Also, it is very Bombay!”

History of Irani cafés : The delightful cafés were started by Persian immigrants to India in the 19th century. Most cafés had their trade-mark high ceilings, European décor meshed with Persian icons and artefacts, and similar food. They are now slowly dying out because of the lack of interest in the trade by the next generation and competition from other eateries and fast-food joints. There were about 350 Irani cafés in the 1950s and are only about 25 now. 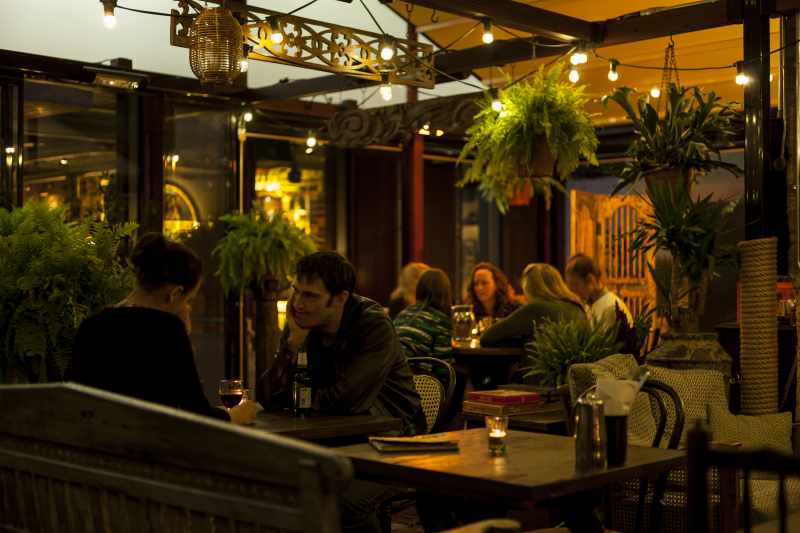 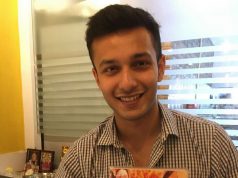 ARE YOU A RICE LOVER? You must change 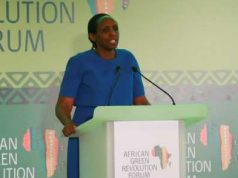