Manish Malhotra, who has completed 28 years in the film industry, is not only excited about styling Bollywood’s new generation actors in films like “Dhadak”, “Student of the Year 2”, “Simmba” and “Loveratri”, but has also been invited by the Academy of Motion Pictures Arts and Sciences to be a member…reports Asian Lite News

The ace designer says that the year 2018 has been very interesting for his career and he feels privileged to have survived this long.

“This year has been very interesting for my career. I complete 28 years in the film industry and I feel very privileged to having survived this long,” Malhotra told.

He is especially excited about working with Bollywood’s new generation.

“I am now excited to work with third generation actors like Ananya Pandey, Alia Bhatt, Janhvi Kapoor. This year I’m starting with a youth-centric film ‘Student of the Year 2’ where I’m styling Tara Sutaria, Ananya Pandey and Tiger Shroff, then moving totally towards a contrast period movie like ‘Kalank’.

“Whether it’s Janhvi (Kapoor) for ‘Dhadak’, Sara (Ali Khan) for ‘Simmba’, Ananya and Tara for ‘Student of the Year 2’ or Warina (Hussain) for ‘Loveratri’, it brings me great excitement to work with all these young actresses. I like working on diverse projects that are challenging and helps me showcase my creativity. This year is going to be very busy and I’m excited to work with young actors, matching their energy,” he said.

From styling late actress Sridevi to now designing for daughter Janhvi for “Dhadak”. Was it an emotional journey?

“‘Dhadak’ is very special to me as I have seen Janhvi since her growing up years and having worked with her mother from the very beginning of my career, it brings me great joy to see her on the silver screen. I have full faith in her talent. She is extremely hardworking and is so focused. 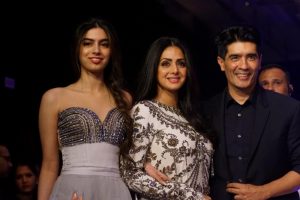 “Her expressive eyes, interesting voice… and being a fabulous dancer, Janhvi is going to be an incredible actress making her mother and all of us very proud,” he said.

Talking about the aspects he has kept in mind while making costumes for the young actress, Malhotra said the film’s setting in Udaipur and Janhvi’s role as a rich minister’s daughter, steered his designs.

“While her character hails from a conservative household where her father is very protective of her, yet she plays a contemporary girl in the film. Hence, I’ve used very interesting styles for her look. You will see her donning printed kurtas with harem salwar, a waist coat, malmal ghagras to kalidars in vibrant hues such as red and ivory with fabrics that are inspired by the vivid culture of the city of Rajasthan,” he said.

Since this is Janhvi’s first film, he wanted to make sure that her look is fresh and different.

“I wanted to move away from the typical silhouettes like kurtas and salwars. Hence, you will notice that I have mixed multiple colours, textures and prints, making the look more young and vibrant. The star look of the movie is the kalidars that are flared and fitted. My aim for Janhvi’s character was to make her look unlike any other actress that has been set in a similar theme or story,” said the designer.

It’s not just Bollywood projects that are keeping him busy. He is one among the almost 20 Indian talents invited for Oscar Academy’s Class of 2018. He feels great.

“Having been part of the industry for 28 years, it’s a privilege to see Bollywood to be recognised on a global platform such as this. I am really looking forward to my association with them and being on the panel with stalwarts from the international and Indian film industry.”

Shah Rukh Khan, Soumitra Chatterjee, Naseeruddin Shah, Tabu, Madhuri Dixit, Ali Fazal and Anil Kapoor, apart from producers Aditya Chopra and Guneet Monga, as well as music artistes Usha Khanna and Sneha Khanwalkar are among the Indians invited to be a part of the Oscar Academy’s Class of 2018.