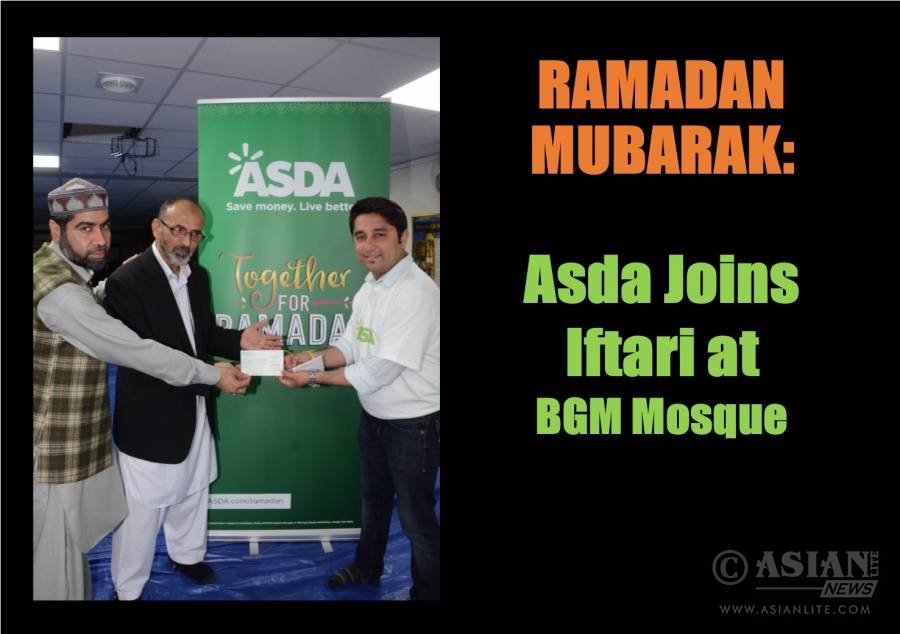 Nation’s leading supermarket Asda joins Birmingham Central Mosque in their initiative to engage with the community in their precious moments…..reports Asian Lite News

Speaking about Asda’s participation Birmingham Central Mosque Administrator Mohammad Ali said: “The Mosque is a community place and we welcome people and organisations from different backgrounds. We are thankful that Asda is supporting this initiative in the mosque. Also, we are very pleased that Asda is offering Ramadan products, which helps the community during this holy month.”

Mosque goer Asad Malik said: “It is great to see Asda organising the food here today and highlight the benefits of Ramadan, it is a great thing. It has been very hard this year and the last few years, with one fast going up to 22 hours but with companies like Asda partnering with this, it seems they understand Muslims.”

The Iftar was attended by community leaders and  Asda community colleagues

Cllr Majid Mahmood, Labour Cabinet Member for Value for Money and Efficiency said: “It is a pleasure to see some of our corporate partners such as Asda work with Birmingham Central Mosque for initiatives such as feeding the needy through communal Iftars. It brings out the essence of Ramadan which is generosity along with building inclusiveness together with communal harmony and bringing about social cohesion in one of the most diverse cities in the country. It is an initiative that I am fully in support of, and thank Asda for their generosity.”

Ramadan being the month for generosity, giving and selflessness along with fasting – Asda decided to partner with the second oldest mosque in the UK. Every year the Birmingham Central Mosque opens their doors to people from different faiths and backgrounds to serve a wholesome Iftari meal in a bid to bring together the community and also help those who cannot afford a proper meal.

Since Ramadan is about giving Asda joining in with Birmingham Central Mosque seemed as the right thing keeping the essence of Ramadan in mind.

Speaking about the initiative spokesperson from Asda said: “As a supermarket we are constantly striving to make changes to our world food range to make it more relevant to the community and Ramadan is one of the most important times for us. While food plays a role during this month, we understand that Ramadan is a lot more than that – it encompasses charity, giving, sharing, togetherness, appreciation and a lot more which makes us selfless human beings. Keeping this in mind our initiative with Birmingham Central Mosque has been a humbling experience, keeping the essence of Ramadan in mind and letting us be a part of the community.”

One of the mosque goers Mohammad Islam said: “The interesting part about today’s Iftari is that we have people from different ages, backgrounds, and religions all sitting under one roof. And it is amazing to see people who do not know each other eat together. When I was a kid, sharing a meal around the table was a bond of unity – a family bond. That’s what people who organise this Iftari create. So with Asda coming here today they have helped in strengthening this bond – and that’s the importance of what is happening today and why this initiative by Asda is so important.”

Joining Asda community colleagues and volunteers from the Birmingham Central Mosque were community leaders who served food to the people present along with breaking their Iftari with them.