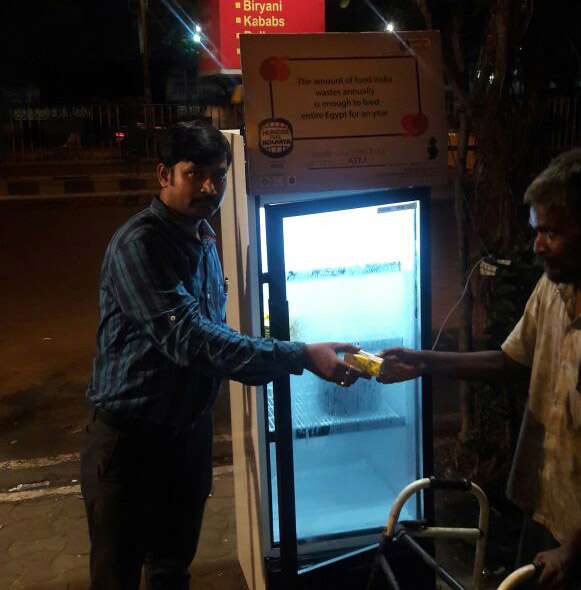 ‘Food ATM’, a 320-litre refrigerator laden with leftovers, is ensuring that the poor and needy in the city do not go hungry, thanks to an initiative by a restaurateur in Kolkata….reports Asian Lite News

Asif Ahmed, the co-owner of Sanjha Chulha restaurant chain, started the ‘Food ATM’ with support of three organisations (Rotary, Round Table, JITO) in front of one of his outlets in Park Circus to help curb food wastage and feed the needy.

“It’s a transparent door refrigerator that is used to store food items. We are educating our customers to pack the leftover food and donate it. In addition to the leftovers from our outlet, people of the city are coming and donating food. Biriyani and bread are some of the common items. They are putting in fresh food as well,” Ahmed said.

The refrigerator is topped with a placard saying “the amount of food India wastes annually is enough to feed entire Egypt for a year”.

Ahmed said the ‘Food ATM’ was inspired by similar food bank concepts in India and other parts of the world.

“One doesn’t need any card to access the food. It’s just the hunger that lets one access what they need. We are getting a good response from locals,” he said.

Ahmed plans to extend the service to his other three outlets in the city as well.

The initial investment was around Rs 50,000, including the cost of the refrigerator.