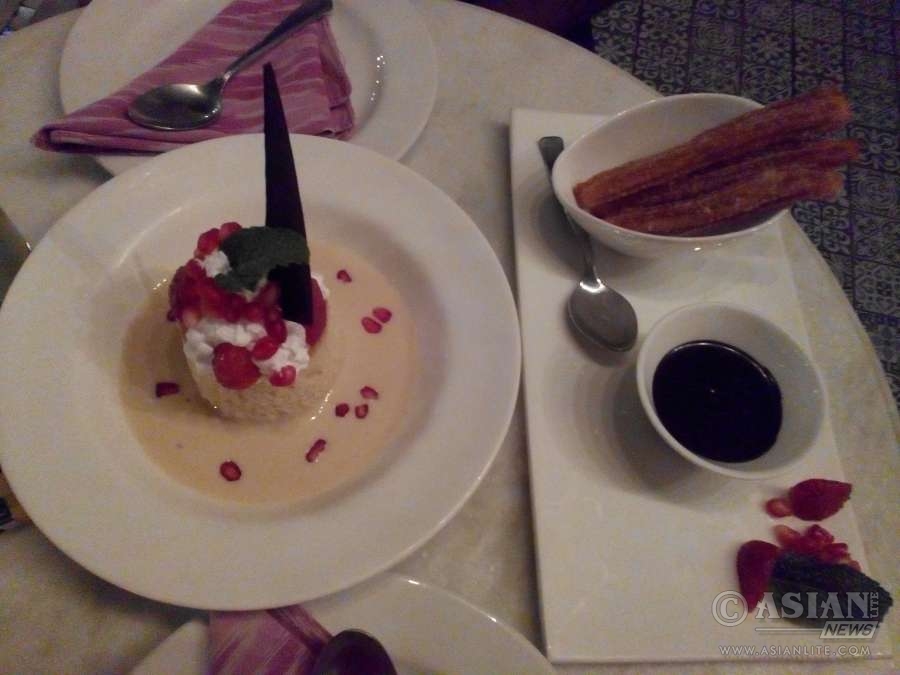 La Bodega, where the ‘real’ Mexico comes alive on a plate . . . . By Karishma Saurabh Kalita

“Mexican food is just not a plate of nachos with a heap of toppings; it is so much more than that,” says Neeti Goel, owner of La Bodega, a colourful eatery that transports you to the streets of the “real” Mexico – sans the fusion.

Located in South Delhi’s posh Khan Market, La Bodega plays with all the senses. The interiors are subtle, not over the top with red and orange being the dominating colours along with Aztec prints, wooden flooring and a mural depicting a Mexican market. Seating is sprawled across two floors along with the terrace.

Launched by sisters Neeti and Smriti, La Bodega opened its doors in June 2014.

“We do not offer Tex-Mex (fusion of American and Mexican cuisine) here, we serve what one could find at somebody’s home in Mexico,” Goel told.

“When we opened two years ago, the concept was a little alien and they either loved it or did not really understand. But now when they come in, they know exactly what to expect,” Goel added.

The menu is not very extensive. It is divided into antojeria (street food), botanas (snacks), large plates, salads, soups and desserts.

To start on this Mexican trail, we were served classic margarita cocktails, which were undoubtedly the perfect tequila-based lime infused drink to start our food journey.

The drinks were quickly followed by tortilla chips with green and red salsa dips and sour cream, a tostadas (flat roasted tortilla with toppings) platter, cochinita pibit taquito (rolled-up tortilla with filling) and the gringa des res quesadillas, all which were part of the antojeria section of the menu.

The platter had three types of toppings – potato and chorizo, shrimp and pulled chicken, out of which the first and second were the winners. The flavours were practically doing a salsa in my mouth. A perfect balance of spice and sourness from the addition of fresh lime juice made the dish unforgettable.

The taquito consisted of a pulled pork filling, which was moist and juicy and again an amalgamation of flavours. The quesadillas which were filled with jalapenos and cheese, were crisp and being a hardcore non-vegetarian, this dish managed to completely change my thoughts.

Next, from the botanas section, we were served the ceviche de atun and croquetas de papa. The ceviche was definitely the winner of this entire Mexican food trail. Fresh tuna, mixed with Mexican staples like tomato, cilantro and lemon juice served with crisp tortilla chips tasted like tropical summer. Once tasted, this dish could not be put down. Sweet, sour, spice – all at once.

The croquetas de papa were potato and cheese croquettes which can be described as the perfect snack to munch on along with a drink.

From the large plates section, we were served red snapper with a warm white bean salad and cordo adobado – roasted porkbelly with red adobo sauce with corn and mashed potato.

The first dish could be a little towards the acquired side. The fish itself was not very highly seasoned. The skin was very crisp and the the meat was melt in the mouth. The bean salad again had hints of lemon juice and pepper. When mixed, the taste was very pleasant. On the other hand, the pork belly was very well seasoned and the adobo sauce (mix of paprika, oregano, salt, garlic, and vinegar) enhanced its flavour.

To bring an end to this hearty delicious experience, we were served the churros with chocolate sauce and de tres leches – cake made of three kinds of milk (evaporated, condensed and heavy cream) served with chantilly cream and fruit. The long and thick churros or fried-dough pastry are a very popular Mexican snack. Dusted with sugar and cinnamon, when dipped in the chocolate sauce, everything else seem oblivious.

In the second dessert, the cake was served with cream which balanced the sweetness and the strawberries added the much needed tang.

La Bodega would be a desirable place to visit for anyone who wants to experience the “real” Mexico on a plate.