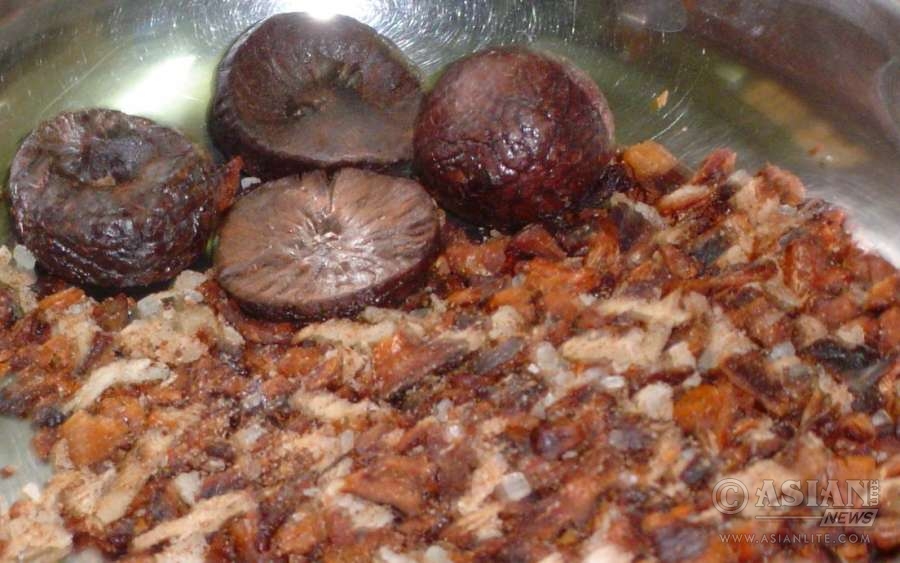 There had always been a love-hate relationship between Ahom and Kangleipak kingdoms, the old names of Assam and Manipur. They went to war numerous times.

But there were also tales of bonhomie. On one occasion, after a Manipuri princess was married to an Assamese prince, the king of Manipur decreed an entire village to emigrate to Assam so that his daughter would not feel lonely in the new land where language, culture and social practices were different.

Villagers in Manipur also migrated to Assam when marauding invaders from Burma (now Myanmar) and China struck. Others often left for economic and personal reasons.

One fallout of this migration was that Manipuris adopted the Assamese habit of eating tamul (betel nut), which then seeped into the society in Manipur. Now the society is grappling with the changing habits of Manipuris, as far as the nut and leaves are concerned.

Cut into six fine pieces the betel nuts are put on betel leaves which in turn are placed on two layers of plantain leaves. This offering became indispensable for religious and social functions. Apart from offering to the Gods and Goddesses, shrines or temples, each guest coming for a wedding, or even a death ceremony, is offered the betel nuts and leaves.

In Assam, the nut is eaten raw. But the Manipuris, who call it kwa, often dump the arecanut in pits for several days to soften it, known as kom kwa.

To meet the widespread practice, several truckloads of betel nuts and leaves used to arrive in Manipur from Assam. The climate in Manipur is not conducive to grow the plant, except in a limited form in some areas bordering Assam.

In Imphal, there are several wholesale shops. Every market and every village had kiosks with women vendors selling skinned or unskinned betel nuts, leaves and lime. Most of the elderly persons are hooked on to the habit of chewing it throughout the day.

As a result, traders in both the states thrived and farmers in Assam got better returns.

But the habit of consuming paan has undergone a change.

Triggered by intervention of militants, and attraction of tobacco laced sweet-laced leaves (mitha-patti paan), the practice of chewing has undergone a transformation, which in turn has brought about an upheaval in the market.

When truckloads of the areca nuts and leaves from Assam used to travel along NH37 to Manipur, the militants — of whom there are groups galore — found it lucrative to extract their pound of flesh in the form of “taxes.” To evade this illegal levy, the truckers would try to move with army convoys. But then they found many of their trucks torched or pushed down deep gorges by the militants.

As a response, perhaps, the Manipur market was practically invaded by the tobacco-laced leaves, called “mitha patti” brought by air freight from Kolkata and other airports.

Ningthemjao, a wholesale trader, said there was a drastic slashing of the demand of Assamese betel nuts and leaves since the chewing habit was adopting to the other variety. “There is still some demand for religious and formal social functions,” he told .

Ibethoi, a woman who used to sell betel nuts at the Keishamthong market in Imphal, said: ” I had closed down my shed many years ago since nobody bought it. People were after the mitha patti paan”.

The business of the costlier “mitha patti” is so lucrative that newspaper packets and other luggages are sometimes off loaded at originating airports to accommodate its consignments. The ‘high quality’ betel nuts that go with this variety is brought in from Myanmar.

Because of a lack of demand for the Assam betel nuts, most kiosks have either closed down or adopted the flown-in variety.

Radhesyam, a social activist, said “guests at functions like marriage ceremony or funeral gatherings had stopped eating the offered betel nut. They just ended up littering the venue.”

He wondered why people still insist on offering it on special ocassions. Inao, an event manager, said: “It (the offering) is made out of respect for the guests for coming to the function and this has to continue”.

Some estimates put the habit of chewing the leaves at 90 percent of the adult population. But it’s not without its darker side.

Health specialists say the incidence of cancer, because of the tobacco-lacing, is exceptionally high in Manipur.

“What is worrisome is that women are not lagging behind men much”, Prof Tomcha, former head of department of Radio Therapy at the Cancer Centre, Regional Institute of Medical Sciences, Imphal, told.

According to Lakpa Laishram, a retired teacher, to avoid the health pitfalls, some families had started serving small packets of coconut pieces, spices and sugar cubes in lieu of the betel nuts and leaves. “It is high time others follow the practice,” she added.

As traders and farmers in Assam and wholesalers and vendors in Manipur suffered from the loss of a lucrative market, the militants too must have seen their illegal income drying up. Some of the insurgent groups called for a ban on “mitha patti paan”.

But since they could not intervene in its supply, the flow was not hampered much. Morever, armed policemen guard markets where wholesale trade in the leaves takes places. Also, highly-mobile traders, often from Bihar, have fanned out across the state to sell their product.

The business has really moved on.