Thomas Cook collapses after 178 yrs in business. One of the world’s best known holiday brands, the business was founded in 1841 in Leicestershire by cabinet-maker Thomas Cook…. reports Asian Lite News

After being in business for 178 years, British travel giant Thomas Cook has collapsed, leaving 22,000 jobs at risk and 150,000 tourists stranded, after last-minute negotiations aimed at saving the holiday firm failed, the media reported on Monday.

The CAA said in a statement on Sunday night: “All Thomas Cook bookings, including flights and holidays, have now been cancelled.

“We know that a company with such long-standing history ceasing trading will be very distressing for its customers and employees and our thoughts are with everyone affected by this news.”

One of the world’s best known holiday brands, the business was founded in 1841 in Leicestershire by cabinet-maker Thomas Cook.

The firm, which operated in 16 countries and ran hotels, cruises and airlines for more than 19 million holidaymakers yearly, had been marred by large sums of debt, political uncertainty and fierce competition.

The BBC said that 16,000 holidaymakers were booked to return on Monday. Authorities hoped to get at least 14,000 of them home on chartered flights.

The government has chartered 45 jets to bring customers home and they will fly 64 routes on Monday, in an undertaking dubbed “Operation Matterhorn”.

The size of the fleet will make it temporarily the UK’s fifth-largest airline.

Operators including easyJet and Virgin have supplied some aircraft, with jets coming from as far afield as Malaysia. 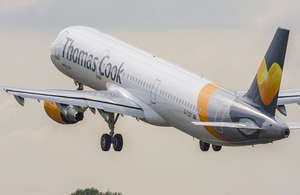 In a statement, Thomas Cook’s CEO, Peter Frankhauser, said the outcome of the collapse was “devastating to many people and will cause a lot of anxiety, stress and destruction”, Efe news reported

“First, I want to apologize to my 21,000 colleagues who I know will be heartbroken, you all fought so hard to make Thomas Cook a success.

“Secondly, I would like to say sorry to all our customers, those who are on holiday with us now and those who have booked with us in the coming months.”

He called the company’s collapse a “matter of profound regret.”

“We have worked exhaustively in the past few days to resolve the outstanding issues on an agreement to secure Thomas Cook’s future for its employees, customers and suppliers.

“Although a deal had been largely agreed, an additional facility requested in the last few days of negotiations presented a challenge that ultimately proved insurmountable,” he added in the statement.

While an estimated 150,000 Britons are affected by Thomas Cook’s collapse, the company has about 600,000 customers abroad, the BBC reported.

In Germany, one of Thomas Cook’s main markets, insurance companies will help organise the response to its collapse.