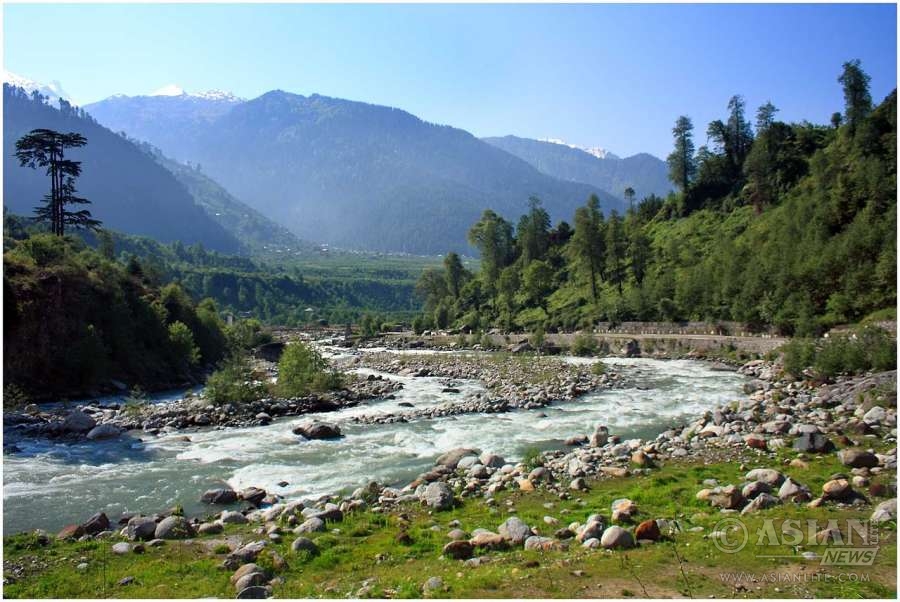 A mountain village becomes a canvas for contemporary artists . . . . By Jaideep Sarin

Close to Bir-Billing, one of the most famous sites in the world for para-gliding, a village is experiencing an artistic transformation.

Life in Gunehar village in Himachal Pradesh’s Kangra district will take another colourful turn, thanks to the efforts of German-born cultural impresario Frank Schlichtmann who is now settled here, when conceptual artists descend here next month for the second edition of the ‘ShopArt ArtShop art event.

The ‘SA/AS-2’, according to Schlichtmann, will focus on experimenting with some of the major issues facing the art world and its disconnect with society at large.

“Our approach is to merge different methods into an inclusive event that is relevant on several levels. SA/AS-2 is about creation and presentation of arts to a broad public,” Schlichtmann, who is the main organiser of the event along with his London-based event partner Ketna Patel, told .

The ‘Art-ivism collaboration between Schlichtmann’s ‘4Tables Project’ and the ‘Ketna Patel Studio’ has already lined up contemporary artists from India and abroad to be part of the month-long ‘SA/AS-2’.

Schlichtmann, who was born in Hamburg, Germany, and came to India for the first time when he was barely four, started the ‘4Tables Project’ almost eight years ago with the “aim of creating a space for alternative and meaningful living”.

“The 4Tables project has grown from a small gallery and cafe to now include village beautification activities, restoration of traditional buildings, interactive village activities and, of course, SA/AS.

The village itself now hosts an art gallery, an ecological boutique hotel, a fusion restaurant and other infrastructure that has been carefully planned and implemented in a manner so as not to destroy the fabric of the village, and yet develop it into an alternative destination based upon the idea of quality, responsibility and non-destructive development,” Schlichtmann explained.

Though Schlichtmann, who has worked and lived in three continents – Europe, Asia and America – had been coming back to India on a regular basis, a set of coincidences made him settle down permanently in this small Himachal village with his little son “so that he could start putting his vast experience into cohesive practice”.

“Why only Gunehar?” the question does not boggle Schlichtmann.

“I chose the village because of its relative unspoiltness and also because I believe that in a truly globalized and interconnected world, a small village can be as valuable as any other place,” he said.

The first edition of SA/AS, in May-June 2013, featured 13 international emerging artists. It saw over 6,000 walk-in visitors, as the event showed that “there is a great acceptance for such a non-elitist approach to arts and artists and arts events”.

“The SA/AS residency, paid for entirely by us, invites 10-12 conceptual artists to live in a village for a three-week period and work in/with the spaces the village offers (such as primarily empty, economically unviable shop-spaces) in front of curious and sometimes prying villagers and visitors,” Schlichtmann explained.

The do’s and don’ts for SA/AS artists include that they have to be “aware of global contemporary art trends, uncompromising in their work, integrative with villagers and local themes in their work, incorporate local material and methods in their work and be able to transcend, through their work, all three levels: rural-India, urban-India and the global space”.

“The artists have to work in the open, which is unusual since the creative phase is a difficult and vulnerable one for many artists and they usually don’t want to be under scrutiny,” he pointed out.

“I thought of the concept in 2012 and went ahead with it the next year. Since there are a lot of empty shops in our village, the original idea was to fill these empty spaces with arts, thereby giving the shops and the whole concept of commodity an alternate meaning.

“SA/AS is an event that takes everybody – whether villager or city dweller, illiterate or art educated – on equal face value. It was an incredible experience,” said Schlichtmann, curator of the project and a keen observer of international arts and culture.

Gunehar, located near Baijnath town, is a small village just off the popular para-gliding destination of Bir-Billing in Kangra district. It is about 70 km from Kangra town (which is 230 km from Chandigarh).