The proportion of students passing their A-levels has dropped for the first time in three decades following a clampdown on exam re-sits and a shift towards tougher subjects. Figures published on Thursday show that 26 per cent of exam papers were graded at least an A this year, down from 26.3 per cent last summer. It was the third straight annual drop at A grade, according to a report in the Telegraph. 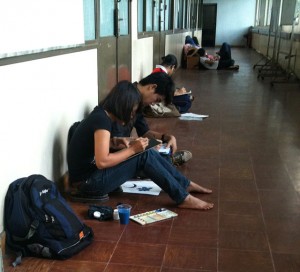 The overall number of A-levels with a pass grade – at least an E – declined for the first time in 32 years following three decades of annual rises. Fewer exams were also graded B, C and D. But in a surprise move, it emerged that a record proportion of papers had been awarded an elite A* – the grade introduced by the last government in 2010 to mark out exceptional performers, the report said.
According to exam boards, 8.3 per cent of papers gained an A* this year compared with 7.7 per cent a year earlier, the highest rate since it was introduced. It also emerged that the traditional gender gap between boys and girls had narrowed, with the gulf at A grade smaller than at any point since 2000. The overall decline in grades at most levels follows criticism of “relentless grade inflation” over the previous 20 years when results had risen annually, the report said.
“For the first time, students have only been given one opportunity to sit test papers within the same academic year after the January exam window was scrapped. It is believed that the decline in top-end results has been fuelled by a shift towards tougher A-levels that are in high demand among universities and employers, while entries for subjects such as media studies and critical thinking nosedive to a record low.
“In all, 98 per cent of papers were awarded at least an E, down by one percentage point, the first time the pass rate had not increased since 1982. The publication of grades for 260,369 students in England, Wales and Northern Ireland triggered confirmation of record numbers of university places,” it said.