Michael Bloomberg, the aspirant for the Democratic Party’s nomination for President, has said that India was a big problem for climate change than China and drew immediate media criticism.

Asked by the moderator at the Democratic debate on Wednesday about how to get China to deal with climate change, Bloomberg said: “In all fairness, the Chinese have slowed down. It’s India that is an even bigger problem.”

In framing the question, NBC anchor Lester Holt pointed out: “Your business is heavily invested in China, the number one producer in the world of carbon emissions… How far would you go to force China to reduce those emissions and tackle climate crisis?”

Bloomberg said sarcastically: “Well you’re not going to go to war with them.”

China’s carbon dioxide (CO2) output is 27.2 per cent of the global output, while India’s is only 6.8 per cent.

However, according to the Global Carbon Project that reports on CO2 emissions, China was responsible for most of the increase in the world output of the gas last year increasing its emissions by 2.6 per cent.

Several media from across the political spectrum criticised Bloomberg’s claim.

The New York Times fact check labelled it as “False”.

The conservative Washington Examiner accused him of “falsity” and said: “Michael Bloomberg blew it on China at Wednesday’s Democratic presidential debate. The former mayor of New York City praised China, our greatest global adversary, and attacked India, our most valuable rising strategic partner.”

Bloomberg is the owner of the news and financial service company that bears his name and is also a former mayor of New York.

This was the first time he was participating in the Democratic debate, having skipped the previous eight.

Former Vice President Joe Biden took aim at China’s ‘One Belt One Road’ programme and accused it of taking the “dirtiest coal” from Mongolia and spreading it around.

He said that he would get countries to join in imposing tariffs to get Beijing to clean up the pollution.

Holt’s question on China, which drew Bloomberg’s comment was based on an unfair comparison of greenhouse gas outputs which makes China the biggest emitter, followed by the US and China.

On a per capita basis, Americans emit 15 tonnes of CO2 per year, which is more than double that of a Chinese person’s 6.6 tonnes and almost ten times that of an Indian’s 1.6 tonnes, according to data from Statista. 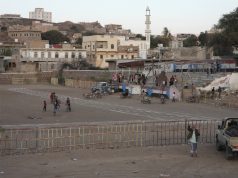