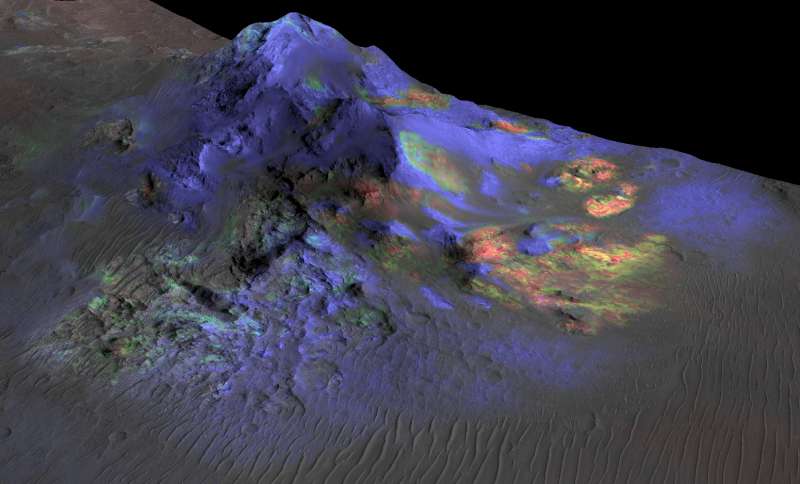 In a pioneering feat, researchers have discovered glass deposits on the Red Planet, providing a delicate window into the possibility of past life on the Red Planet…..reports Asian Lite News

Using data from NASA’s Mars Reconnaissance Orbiter (MRO), the team from Brown University detected deposits of glass within impact craters on Mars formed in the searing heat of a violent impact.

Previous research has shown that ancient biosignatures can be preserved in impact glass.

“Knowing this, we wanted to go look for them on Mars and that is what we did here. Before this paper, no one had been able to definitively detect them on the Martian surface,” said Kevin Cannon, PhD student at Brown University.

These glass deposits are relatively common impact features on Mars and could be targets for future exploration.

To identify minerals and rock types remotely, scientists measure the spectra of light reflected off the planet’s surface.

But impact glass does not have a particularly strong spectral signal.

“Glasses tend to be spectrally bland or weakly expressive, so signatures from the glass tend to be overwhelmed by the chunks of rock mixed in with it. But Kevin found a way to tease that signal out,” Mustard said.

In the lab, Kevin mixed together powders with a similar composition of Martian rocks and fired them in an oven to form glass and measured the spectral signal from that glass.

Once he had the signal from the lab glass, he used an algorithm designed to pick out similar signals in data from NASA’s MRO.

The technique was able to pinpoint deposits around several crater central peaks.

The fact that the deposits were found on central peaks is a good indicator that they have an impact origin.

Knowing that impact glass can preserve ancient signs of life opens a potential new strategy in the search for ancient Martian life.

“We think these could be interesting targets for future exploration. In fact, we have a particular spot in mind,” the authors said.

The research was published online in the journal Geology.