Both Hillary Clinton and Jeb Bush, Democratic and Republican frontrunners respectively in the 2016 White House race, have lost some ground in New Hampshire, the state set to host the campaign’s first primary…reports Asian Lite News. 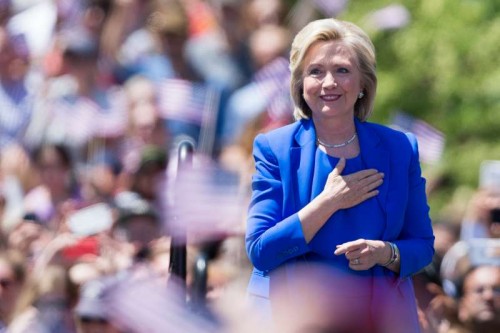 The former Secretary of State’s sizable lead among Democrats in New Hampshire has been trimmed to single digits with Senator Bernie Sanders making a strong push in a state that narrowly broke Clinton’s way in 2008, according to a new CNN/WMUR poll.

Among the Democrats Clinton still holds an 8-point edge over Sanders, with 43 percent behind Clinton and 35 percent backing Sanders.

The poll marks a significant tightening of the contest since May when Clinton stood at 51 percent, with Elizabeth Warren at 20 percent and Sanders at 13 percent.

More see Clinton as presidential than Sanders, with 38 percent saying she has the personal characteristics and qualities a president should have, compared with 27 percent who think Sanders is best representative of those qualities.

On the Republican side, the new CNN/WMUR New Hampshire Primary poll found Trump at 11 percent, just behind Bush at 16 percent.

They were followed by Rand Paul at 9 percent, Scott Walker at 8 percent, and Carly Fiorina and Marco Rubio both at 6 percent. Ben Carson and Chris Christie each have 5 percent support.

As the low numbers at the top of the pack indicate, the field is far from settled with 21 percent saying they don’t know which of the 19 candidates tested in the poll they’d support, and overall, 75 percent saying they’re not committed to any candidate.

Trump’s gains seem connected to perceptions of him as a successful leader on economic issues and personal traits.

A whopping 46 percent say Trump is the one in the field “least likely to act like a typical politician if elected president.” No one else comes close on that measure.

While Bush’s favourability rating has ticked upward Since announcing his candidacy for President on June 1, New Hampshire voters seem to be souring on the rest of the field, the poll suggested.