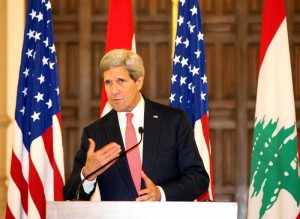 US Secretary of State John Kerry has said Iran can play a role in confronting and destroying the Islamic State (IS) militants.

Addressing the UN Security Council on Iraq Friday, Kerry said there was a role for every country in the world to defeat what he described as a “militant cult masquerading as a religious movement”, Al Jazeera reported.

“There is a role for nearly every country in the world to play, including Iran,” Kerry said.

Earlier this week, Iran’s supreme leader Ayatollah Ali Khamenei said that he had personally rejected overtures from the US for cooperation in fighting IS.

Iranian Foreign Minister Mohammed Javad Zarif also warned that the “dangerous phenomenon” of IS would not be “eradicated through aerial bombardments”.

The US and France are the only countries so far to have announced taking a military approach in the fight against the IS.

The US has carried out over 170 air strikes against the militant group in Iraq since August.