Mr Donald Trump’s obscene demagoguery; his contemptuous regard for the first amendment, his desire to expand the authorities of the presidency (the awesome power of which has never been equal to what it is now), his belligerent and threatening attitude towards the judiciary, his shameless blurring of private and public agendas, his cynical exploitation of the fears of millions of Americans concerning Muslims in the wake of the nation’s deadliest mass shooting in Orlando, his nationalist, anti-immigrant, racist politics, and finally, his endorsement of violent outbursts against dissenters, have all served to raise the specter of a new fascism on the political landscape.

But to what extent is fascism an appropriate name for what Trump represents? By fascism, I simply mean a militaristic regime that is characteristically authoritarian, anti-immigrant, and extremely nationalistic. We must use the term carefully, as it is all too often a sign of intellectual laziness and a lack of conceptual clarity. To complicate matters, we are witnessing Trump’s political rise while at the same time extreme right-wing parties are making startling gains in many countries, including Austria, which had not seen such a development since the end of World War II. This is important because it indicates that Trump is not an isolated phenomenon. He should be thought of primarily as a symptom – a symptom of the decay of the democratic form of global capitalism.

Trump and his European counterparts are symptomatic of the fact that capitalism’s need for democratic institutions and processes has been steadily diminishing. The most efficient administrators of capitalism are arguably turning out to be non-democratic, authoritarian regimes, including nominally communist regimes such as China and Vietnam. When Trump says there is no democracy, that the whole system is rigged, what is most frightening is not that it may be true or that so many believe it to be true – in fact, his very ascendance demonstrates that there is still an irreducible element of contingency in politics.

We are witnessing all over the world the dissolution of the marriage between democracy and capitalism. It can be seen in the corrupt pseudo-communism of China, or the authoritarianism of Putin’s Russia and Erdogan’s Turkey, and it may take the form that we are seeing here: where the rule of law, integrity of our governing bodies, and voices of dissent are treated with contempt and mockery by the leader of a major political party.

Trump’s fascism is especially on display in his endless assurances that he intends for Mexico to finance a massive wall along the US-Mexican border. This promise – a fixture of each Trump rally – should not be answered by giving reasons as to why it is a bad idea, impractical, etc. Once you begin to provide arguments, you’ve already lost – this is because the proposal is not meant to be rational at all, but instead it is precisely meant to mock the use of reason in politics. Trump is treating his followers not as rational agents; rather, they are bundles of repressed, violent energy which Trump has expertly manipulated to his advantage. 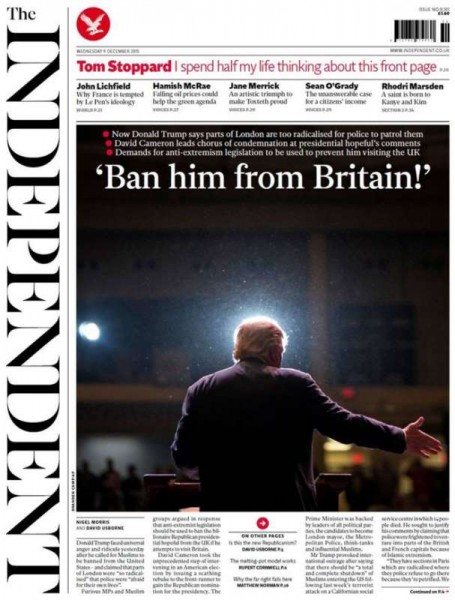 Countless Americans are now more or less ready to deny the basic rights of millions of immigrants under the threat of forcible deportation, and to refuse hundreds of thousands of refugees seeking shelter and asylum. The way to address this xenophobic hysteria is certainly not through the liberal discourse of tolerance and respect for the other. On the contrary, the language of tolerance is totally misplaced here and counterproductive. More appropriate, rather, is a fidelity to human rights and an emphatic refusal to allow any group of people to be denied the fundamental conditions in which to live and thrive. Refugees don’t need sympathy and tolerance from us, and they don’t need us to open our hearts: they need us to open our borders and provide food, shelter, and work.

Trump’s campaign has been a sustained attempt to obliterate the distinction between politics and mass entertainment; to stupefy the masses of uneducated lower-income whites who are transfixed by his apparent wealth and celebrity, his unabashed greed and contempt for anything that cannot be marketed and sold. So should we regard Trump as a kind of new fascist, using a mixture of kitsch, obscenity, and bombast to keep his followers rapt? Liberating the repressed, unconscious wishes of his supporters who are implicitly encouraged to enact symbolic and even physical violence against the perceived other?

The new fascism we are witnessing today should not be confused with the fascism of yesteryear. But perhaps it is no less dangerous in the long run, and conventional political wisdom is no more able to halt its progress. The antidote to the rise of populist politics based on distrust is in how we describe the disease itself. To view Trump simply as an aberration, a metaphysical monstrosity – which undoubtedly he is in some sense – is profoundly inadequate. We must see him as the symptom of a general disease; a disease which is global in nature, and which bears witness to the contradictions and antagonisms of the democratic capitalistic order.