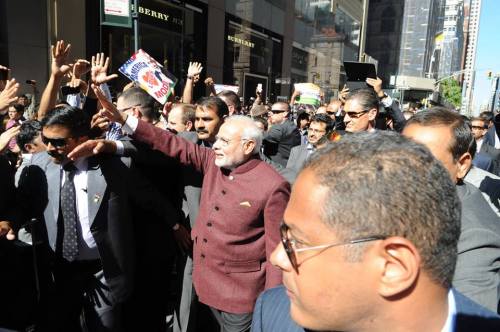 Indian Prime Minister Narendra Modi arrived in New York to a tumultuous welcome by the Indian American community as diaspora members chanted “Modi, Modi” and held placards in his welcome.

Modi, who arrived on a five-day visit to the US, was attired nattily in a dark maroon bandh-gala suit.

A large group of Indian diaspora were gathered near the New York hotel where he is to stay, chanting his name lustily, as Modi waved to them smiling all the while.

During his visit, he will address the 69th session of the United Nations and hold bilateral talks with US president Barack Obama in Washington. He will also address the Indian community in New York’s Madison Square Garden, an event that will be telecast live on Times Square.

A large group of Indian diaspora had gathered near the New York hotel where he is to stay, chanting his name lustily, as Modi waved to them smiling all the while.

Modi’s electoral victory marked a turnaround and Washington is now rolling out the red carpet for him, with President Barack Obama inviting him for a bilateral meeting and a dinner.

He was recieved on arrival by Ambassador S. Jaishankar and other Indian officials and US protocol officers.

Modi is to meet New York Mayor Bill de Blasio later Friday. He has a tight schedule ahead of him with nearly 25 events planned in New York and in Washington for him.

The highlight of Modi’s visit is a community reception organised by the diaspora at the Madison Square Garden in New York Sunday.

About 18,500 people have been issued tickets to attend the event and several thousand more are expected to watch the reception on TV relays at Times Square and in over 40 other venues at universities and other places.

Modi will address the UN General Assembly Saturday and hold a round of neighbourhood diplomacy, meeting with Prime Minister Sheikh Hasina of Bangladesh and Sushil Koirala of Nepal, and President Mahenda Rajapaksa of Sri Lanka.

The day will start with a visit to the 9/11 site, also known as Ground Zero, where he will pay respects to the victims of one of the worst-ever terrorist attacks that claimed more than 3,000 lives. The visit will underscore the common threats that are faced by India and the US from terrorists.

An important part of Modi’s visit is to sell the idea of “Make in India” and to solicit investment and technology. He will meet more than 15 top executives of major US companies Monday.

In a sign of growing influence of the Indian diaspora in the US, one of the politicians he will meet is South Carolina’s Republican Governor Nikki Haley, who is of Indian-origin. Among the top multinational executives he is to meet will be PepsiCo’s Indra Nooyi.

In Washington, he will have a lunch with Vice President Joe Biden and Secretary of State John Kerry. Many business leaders have been invited to the event.

Despite all the dinners, breakfasts and lunches set up for him, Modi will be observing his nine-day Navaratri fast.