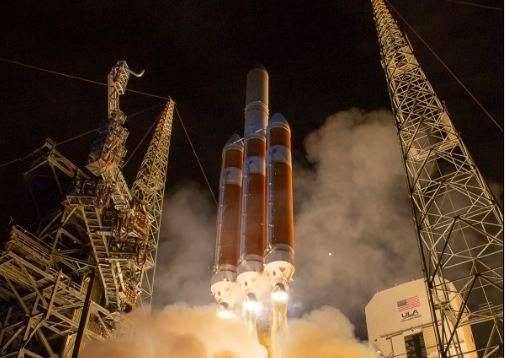 “3-2-1… and we have liftoff of Parker #SolarProbe atop @ULAlaunch’s #DeltaIV Heavy rocket,” the US-based space agency tweeted.

The launch was initially planned for Saturday morning.

The probe is named after Eugene Parker, a solar physicist, who in 1958 first predicted the existence of the solar wind, a stream of charged particles and magnetic fields that flow continuously from the sun.

Nestled atop a United Launch Alliance Delta IV Heavy — one of the world’s most powerful rockets — with a third stage added, Parker Solar Probe will blasted off toward the sun with a whopping 55 times more energy than was required to reach Mars.

Weighing just 635 kgs, it is a relatively light spacecraft, Andy Driesman, project manager for the mission at the Johns Hopkins University Applied Physics Laboratory in the US, said in an earlier statement.

Zooming through space in a highly elliptical orbit, the Parker Solar Probe will reach speeds of up to 700,000 kms per hour, setting the record for the fastest spacecraft in history.

During its nominal mission lifetime of just under seven years, the Parker Solar Probe will complete 24 orbits of the Sun — reaching within 3.8 million miles of the Sun’s surface at the closest approach.

In an orbit this close to the Sun, the real challenge is to keep the spacecraft from burning up.