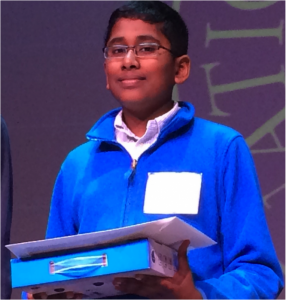 An Indian American student has won the coveted National Geographic Bee championship that includes a $50,000 college scholarship, National Geographic said.Akhil Rekulapelli, 13, hailing from Virginia, outclassed fellow Indian American Ameya Mujumdar in the final head-to-head round of the nationwide contest held in Washington Wednesday.The geography whizkid also received a trip to the Galápagos with National Geographic’s Lindblad Expeditions. The last round competition on stage, hosted by television journalist Soledad O’Brien, had 10 students, including three who had previously competed in the finals. The championship question that helped him clinch the title was: “Oyala, a planned city located in the rainforest 65 miles east of Bata, is being built as a capital for which African country?”Rekulapeklli answered correctly: “Equatorial Guinea.”Eighth grade student Rekulapelli emerged ahead of more than four million students, who originally competed in school-level bees across the US.He started with a school bee in Ashburn, and advanced to the national championship after excelling in both regional and state geography bees.Mujumdar from Florida stood second, while California’s Tuvya Bergson-Michelson finished third.Elaborating on his preparations for the contest, Rekulapelli said that he kept a strict long-distance study regimen with a coach in Florida.“My coach gives me tips and tricks, like about what questions they’ll ask and how to respond,” National Geographic quoted Rekulapelli as saying. “Then I really try to get a good outlook on very big countries, like Canada and Spain. I also have to make sure I stay on top of the news, like by watching CNN and other channels, to make sure I know about changes,” he added.Rekulapelli wants to pursue a career in pre-med or study biology with his eyes set on Stanford and University of Virginia.The 10 finalists this year will vie for spots on a three-person team that will represent the United States in Stockholm next year.The National Geographic Bee is an annual geography contest sponsored by the National Geographic Society. The bee, held every year since 1989, is open to students in the fourth through eighth grade in participating American schools.