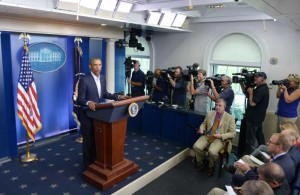 US President Barack Obama renewed his call for “common-sense” gun control measures, one year after a shootout in a US Navy facility in Washington left 12 people dead.

“One year ago, our dedicated military and civilian personnel at the Washington Navy Yard were targeted in an unspeakable act of violence that took the lives of 12 American patriots,” he said in a statement Tuesday.

“One year ago, 12 Americans went to work to protect and strengthen the country they loved,” the president said.

“Today, we must do the same — rejecting atrocities like these as the new normal and renewing our call for common-sense reforms that respect our traditions while reducing the gun violence that shatters too many American families every day,” he insisted.

The Washington shootout, the deadliest ever in the US capital, was perpetrated by Aaron Alexis, a military veteran and defence contractor with mental problems who shot workers on several floors of the Navy Yard complex before being gunned down by police.

The incident took place several months after the Obama administration’s attempt to strengthen arms control failed to win Congressional approval, even though the measure had gained strength after the December 2012 massacre at a school in Newtown, Connecticut, in which 28 children and six adults were killed.

Legislative change was largely blocked by the powerful influence of the National Rifle Association in Congress, which refused to pass a measure that, according to surveys, had the approval of 90 percent of Americans: background checks on arms purchasers.

On the anniversary of the Navy Yard shootout, Obama said that his administration continued “to improve security at our country’s bases and installations to protect our military and civilian personnel who help keep us safe”.

The fact that Alexis had retained his authorisation to enter the military complex, despite being treated for mental illness, led the government a year ago to order a review of security procedures in all military facilities.