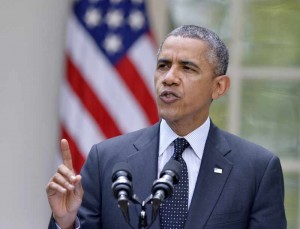 “We are deeply concerned about what is happening in Iraq, and we are not concerned and waiting,” the top American envoy told reporters before meeting with visiting Australian Prime Minister Tony Abbott at the State Department, Xinhua reported.

Militants with the Islamic State in Iraq and Levant (ISIL), commonly known as Al Qaeda in Iraq, have seized major cities in northern Iraq in recent days, including Mosul, the second largest, and Tikrit, the hometown of former Iraqi president Saddam Hussein.

The group has vowed to press on to the capital city of Baghdad, while Iraqi Prime Minister Nouri al-Maliki has reportedly asked the Obama administration to launch airstrikes against extremist staging areas in his country.

“We are providing assistance. We are in direct touch with Prime Minister al-Maliki,” Kerry said, adding, “I know the president of the United States is prepared to make key decisions in short order. ”

Obama, after his meeting with Abbott earlier in the day, told reporters that he would not “rule out anything” in his support of the Iraqi government.

White House spokesman Jay Carney ruled out boots on the ground. “We are not contemplating ground troops. I want to be clear about that,” he told reporters at a daily news briefing.

Obama ordered the exit of all American troops in December 2011 following an eight-year-old war in Iraq, after the Arab country refused to grant legal immunity to remaining U.S. soldiers.

Washington expedited the delivery of weapons and ammunition to Baghdad, including Apache attack helicopters, Hellfire missiles and F-16 fighters, and stepped up training of Iraqi security forces early this year, after the ISIL and other rebels occupied Fallujah and parts of Ramadi, big cities in the western province of Anbar.